The type specimens were collected early in the morning in the reserve belonging to the Biological Dynamics of Forest Fragments Project (Smithsonian Institution / World Wildlife / Instituto Nacional de Pesquisas da Amazonia (INPA) Collaborative Project). This reserve is a very large patch of continuous forest and is often referred to by the project participants as “41” reserve (Benton. pers. comm.). Dr. Benton observed a short trail (at most about 1 m long) at night, emerging from a hole in sandy soil in a forest clearing in which the main camp site of the “41” reserve is situated. At the end of the trail the ants were feeding on small pieces of cut earthworm. Dr. Benton was not certain the ants had killed the earthworm or were merely opportunist scavengers. (Mackay 1996)

A member of the serratulus species complex. Mackay (1996) - This species could be confused with Acanthostichus lattkei. It can be easily separated based on three good characters: the anterior half of the head is finely striate or costulate (anterior fourth of head of A. lattkei is similar, but more finely sculptured), the anterior medial tooth of clypeus is absent (present in A. lattkei and the medial border is strongly and deeply excised (Fig. 7), and the top of the petiole is fmally punctate (lightly longitudinally striate in A. lattkei. The petiole is not quadrate with carinae on the lateral edges as in A. quadratus. It differs from A. serratulus as there are no carinae on the lateral edges of the petiole. The excised clypeal border easily separates it from workers of essentially all other species. 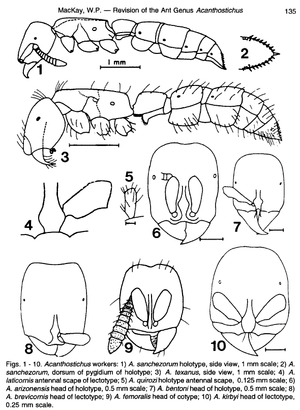 Named in honor of the collector of the type specimens. Dr. Forbes Benton. The specimens were forwarded to me by Dr. Ana Harada.