Often collected in light traps in January and from April to October. Specimens from Colombia and Venezuela were captured in malaise traps in September, October and February. (Mackay 1996) 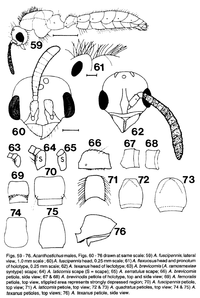 A member of the brevicornis species complex. Mackay (1996) - There has been considerable confusion regarding this species as the description was based on a mixed species series. Emery (1895) illustrated the upper specimen of two (lectotype, here desg.) in Plate 17, Fig. 13 as A. fuscipennis. Figures 5a, b. c, and d are of the lower specimen on the pin, which is that of Acanthostichus quadratus. Due to the mixed series, Emery concluded that A. fuscipennis was closely related to Acanthostichus serratulus (which is incorrect. and is the result of the mixed species type series). As a result of this many males in collections were identified by myrmecologists as A. fuscipennis. The males of A. fuscipennis are among the most distinct and easily recognized in the genus, based on the shape of the petiole. The node of the petitole (as seen from above and with the anterior face hidden from view) is broader than long (elongate in most other known species) and narrowed posteriorly. with a suture which passes over the posterior edge of the petiole (Fig. 70). The node of the petiole is smooth, shining and broadly rounded anteriorly. Most specimens have bluish reflections on most of the body parts, especially the head and pronotum. This characteristic must be used with caution as others, such as A. serratulus, Acanthostichus kirbyi and Acanthostichus laticornis, also have bluish reflections, but the petioles in these species are elongate. Specimens of A. fuscipennis without bluish reflections can be recognized by the shape of the petiole. In addition, the aedeagus is elongate with small widely spaced teeth (which are occasionally absent). The ventrally directed teeth are well developed on both the aedeagus and the volsella. A Colombian specimen has relatively larger eyes and less bluish reflections. A Venezuelan specimen has eyes of normal size, but the node of the petiole is triangular shaped, and not rounded as in the typical A. fuscipennis. There seems to be a reasonable amount of variation in this species, even in specimens collected at the same locality. I tentatively conclude that all of these specimens are A. fuscipennis, although this may be incorrect. Unfortunately it is impossible to link this species to workers of any other species; thus the workers of A. fuscipennis are unknown at this time. This species is not the male of any of the described species of the brevicornis species complex as all the species in this group without known males occur outside the distribution of A. fuscipennis.

Known only from the male caste.