A relatively common species with workers that are morphologically variable across the wide range of the species.

The species boundary of A. goeldii was difficult to ascertain, and there is still some degree of uncertainty surrounding this species and its immediate relatives. The difficulty arises from the fact that workers within the goeldii complex are very difficult to distinguish from each other. A. goeldii workers are virtually indistinguishable from Acropyga palaga (see A. palaga for further discussion), but additionally, Acropyga epedana, Acropyga keira, and Acropyga exsanguis all present difficulties in identification from one another. Listed are characters that can provide some diagnostic help in identifying this species; comments in parentheses are for A. goeldii. From: A. exsanguis (usually wider head, more antennal segments and larger in total length), A. keira (many more erect hairs on mesosoma), A. epedana (more erect hairs on mesosoma and longer, wider head).

Since A. goeldii is such a variable species, the worker caste is unreliable for diagnostic purposes. Worker specimens have been observed, for instance, with a range of mandibular teeth from 3 well-defined teeth, 3 well defined teeth and a smaller more offset basal tooth, to 4 well defined teeth. Additionally, the mesonotal dorsum has been observed to be at the same height as the propodeum in some specimens, but in other specimens the mesonotum rises well above the level of the propodeum. The shape of the worker head is variable as first observed by Bünzli (1935). At this time however I do not believe that the variation observed warrants separate species recognition.


LaPolla (2004): This species has a wide range across tropical South America, and has been recorded occurring as far north as Barbados and Costa Rica. It is found in Suriname, Panama, Trinidad and Tobago, Paraguay and Colombia. 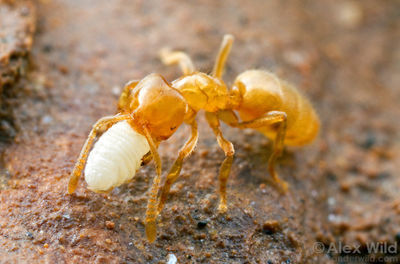 Weber (1944) reported this species was found "tending the common Trinidad type of coccids on rootlets of small plants which were interwoven into the husk of a brazil nut fruit lying on the ground. Under the husk was yellow sandy clay soil in which the ants had tunnels." He also reported trying to feed a small nest series he placed in a glass container to observe them while they were alive and found they did not eat pieces of fruit offered to them. As in Acropyga epedana (LaPolla et al., 2002) this species apparently only fed on honeydew produced by the mealybugs, and the nest died within a month (mealybugs were present, but they had no roots to feed on). He did not report if any of the mealybugs had been eaten by the ants, and interestingly carnivory in "starving" nests has not been reported.

This is most likely the species Eberhard (1978) reported as being trophophoretic (identified from specimens deposited at MCZC). He observed several mating swarms of males and females, each consisting of several dozen individuals. The swarms seemed to be either predominantly male or predominantly female. Eberhard (1978) observed that the emergence of reproductives occurs in the day after a recent rainfall and that they come out of the nest through small holes (in this case in a grass lawn). Around the holes several workers were observed on the surface, and this is perhaps the only time that Acropyga workers emerge from their nests to the surface. Predation of alate queens that had recently emerged from nests by the ponerine ant, Ectatomma ruidum was also observed.

Jack Longino: The few Costa Rican records of this species are from cloud forest habitats. Workers have been collected in Winkler samples of sifted leaf litter from the forest floor.

LaPolla (2004) - The taxonomy as presented of the decedens species-group relies heavily on male morphology, but males are scarce in collections, thereby making assessment of male variation among and between species difficult. Hence, I have been hesitant to "split" some of the variation observed in workers of this species as separate species. Males have proven exceedingly useful in the ascertaining of most species boundaries in the decedens species-group. However, even males for A. goeldii are, like the workers, morphologically variable. The defining characteristics are found in the penis valve structures. In A. goeldii penis valves possess a rounded ventral extension and the dorsal margin of the penis valves bulge out slightly toward the apodeme. The ventral aspect of the penis valves are also unique to the species. In contrast, the parameres vary considerably and look similar to A. palaga, in that the width of the parameres does not vary much across its length, or they can become narrower caudally from the base and become wide again near the caudal ends. Specimens in which parameres resembled A. palaga but the penis valves fit the A. goeldii type for now are regarded as A. goeldii. Nonetheless, as more worker-associated male specimens of this species become available its status should be reevaluated, because it would not be surprising if there are several species (some of which mayor may not be closely related) "hidden" under what is presently known as A. goeldii. For instance, the workers of Acropyga decedens are difficult to distinguish from A. goeldii, and the latter was even synonymized with A. decedens by Costa Lima (1931). However, despite the morphological similarity of workers, A. decedens and A. goeldii are clearly not closely related once male morphology is compared.