The type series was collected from beneath a piece of wood in a garden.

Little is known about the biology of Aenictus powersi. The genus is comprised of species that live an army ant lifestyle. Aenictus typically prey on other ants, from other genera, or other insects such as wasps or termites. There are reports of Aenictus preying on other insects as well and even have been observed collecting honeydew from homopterans (Santschi, 1933; Gotwald, 1995) but this appears, at least from available evidence, to be uncommon. Foraging raids can occur day or night across the ground surface. Occasionally raids are arboreal. During a raid numerous workers attack a single nest or small area, with several workers coordinating their efforts to carry large prey items back to the nest or bivouac. Aenictus have a nomadic life style, alternating between a migratory phase in which nests are temporary bivouacs in sheltered places above the ground and a stationary phase where semi-permanent underground nests are formed. During the nomadic phase bivouacs move regularly, sometimes more than once a day when larvae require large amounts of food. Individual nests usually contain up to several thousand workers, although nest fragments containing only a few hundred workers are often encountered. Queens are highly specialised and look less like workers than in most ant species. They have greatly enlarged gasters (dichthadiform) and remain flightless throughout their life. New colonies are formed by the division of existing colonies (fission) rather than by individual queens starting colonies on their own. 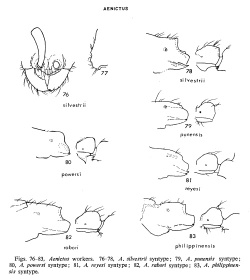 Head scarcely longer than broad, subrectangular, nearly as broad behind as in front, with feebly rounded sides and straight posterior border, the posterior corners rounded, not produced. Frontal and genal carinae very short, the latter not dentate. Clypeus concave, with narrow, translucent anterior border, sub triangular, with a large blunt apical tooth and several minute, irregular basal dentides on the terminal border, the external border convex. Antennae short, the scapes thickened apically, reaching to the posterior third of the head, first funicular joint small, as long as broad, joints 2-8 slightly broader than long, terminal joint a little longer than the two penultimate joints together. Pronotum slightly flattened above, the mesonotum short, sloping to the mesoepinotal constriction, which is moderately pronounced. Epinotum with convex base and concave declivity, the boundary between the two developed as a blunt point. Petiole nearly as broad as long, its node evenly rounded and hemispherical, the ventral surface with a transparent lamina, produced behind as a downwardly and backwardly directed spine. Postpetiolar node resembling the petiolar node but somewhat broader and slightly broader than long, anteroventrally with a well developed tool;h, which is directed downward and forward. Gaster regularly elliptical. Legs with incrassated femora and tibae.

Hairs white, uneven, rather delicate, sparse on the body, short on the appendages.

Mandibles, antennal fovere and anterior border of head reddish brown, remainder of head, antennal scapes and thorax yellowish red; pedicel, gaster and legs, including the coxre, yellow; antennal funiculi brown, except the terminal joint, which is yellowish red like the scapes.

Described from several workers taken near Dumaguete at an altitude of 1,800 feet from a single colony under a piece of wood in a garden. This species is hypogaeic.