Prins (1983) noted there were "more repletes present" in the type collection (in comparison with the Agraulomyrmex meridionalis type material). South African material has been collected from a grassland pitfall trap in the Pretoria Botanical Garden. This is all that is known about the biology of Agraulomyrmex wilsoni.

Alitrunk with promesonotal and mesonotal-propodeal sutures well developed, mesometanotal suture absent; propodeum rounded from front to back, unarmed. Petiole with very small or rudimentary scale overhung by base of abdomen. Legs moderately long.

Although the ten-segmented antennae point to a myrmelachistine relationship, these ants share characters with the plagiolepidines, viz. the absence of a distinct antennal club, the structure and form of the alitrunk (the absence of a distinct metanotum as in certain members such as the genus Acropyga), as well as the structure of the asepalous proventriculus. The new genus is therefore included in the tribe Plagiolepidini.

Workers of these ants bear a close resemblance to those of the genus Acropyga (Prins 1982); however, they are much smaller and darker in colour, and the eyes are much larger. In members of Acropyga the eyes are very small, consisting of only a few facets. The petiolar scale is also much more reduced than in Acropyga.

Brown; antennae, mandibles, legs and mesonotum paler in colour, almost brownish white in some individuals; eyes black. Fairly shiny all over. Finely sculptured with piliferous punctures as in Agraulomyrmex meridionalis, giving integument an almost fine reticulate or reticulate-punctate appearance; in some specimens head somewhat duller than in A. meridionalis. Pubescence and pilosity as in A. meridionalis.

Head quadrate in dorsal view, about one-sixth (or slightly more) longer than wide and three-eighths wider than pronotum, sides and hind margin almost straight. Clypeus and mandibles as in Agraulomyrmex meridionalis, latter with four sharp teeth. Scapes slightly more than three-quarters as long as head (dorsal view mandibles excluded) and falling short of hind margin by about one-fourth of their length; flagellum about one-half longer than scape; the first segment as long as second to fourth taken together; apical one about as long as four preceding ones taken together; remaining segments as wide as or wider than long. Eyes about one-fourth the length of the head (dorsal view-excluding mandibles) and situated in front of middle of sides. Maxillary palp five-segmented, labial palp three-segmented.

Alitrunk as in A. meridionalis, about three-eighths longer than wide over pronotum, sutures clearly indicated. Scale of petiole much more reduced, about as long as wide and about as high as long or slightly higher; seen from behind almost as in A. meridianalis. Otherwise as in latter species. 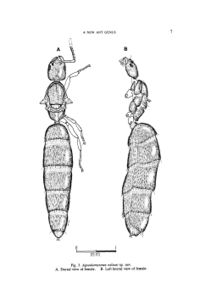 Somewhat damaged, both flagella broken off.

Brown, legs, antennae and mandibles paler in colour, eyes black, moderately shiny. Finely and superficially punctate or reticulate-punctate, especially on legs and antennae. Pubescence and pilosity as in worker, except for some pilose hairs on scutellum.

Head quadrate in dorsal view, nearly one-sixth longer than wide, and slightly narrower than truncus; sides and hind margin almost straight. Frontal carinae, fontal area, mandibles, and clypeus as in worker. Eyes large, occupying about one-fourth the length of the head (dorsal view-mandibles excluded). Scapes about three fourths as long as head (dorsal view-mandibles excluded) and falling short of hind margin by about the length of the second segment of flagellum.

Alitrunk slightly less than twice as long as wide, parapsidal furrows indicated, scutellum one-fourth the length of the scutum; seen from above alitrunk appears oval in outline; in profile propodeum slopes down fairly steeply towards junction of petiole. Latter with almost obsolete scale which is slightly wider than long and about one-fourth higher than wide. Abdomen in specimen examined nearly twice as long as head and alitrunk taken together, oval at base. Legs moderately long, femora somewhat swollen.

These ants are much smaller than A. meridionalis, much paler in colour, and more repletes were present.

This species has been named after Dr K. J. Wilson of the Ministry of Agriculture, Harare, Zimbabwe (formerly Salisbury, Rhodesia), who collected the sample.