A South American arboreal ant nesting in the domatia of the ant-plant Cordia nodosa as well as foraging on a range of other plants.

Fernández (2007) - Besides the 8 segmented antennae, this species is characterized by the mesosomal profile in lateral view, with the promesonotum remarkably convex, in contrast with the propodeum, which has a short dorsal face forming a continuous and slightly angulate convexity with the posterior face. The petiolar peduncle is shorter and the petiolar node is thicker. The apical and subapical teeth tend to be a little larger than the rest. The anterior clypeal hairs are very short and nearly invisible; the medial hair is hardly visible.

Both hairs on the dorsum of the head near the vertexal margin, are sometimes broken, and sometimes accompanied by a third hair. All of the short hairs are almost appressed (without being pubescent). In the majority of the observed specimens the promesonotum possesses 6 clearly defined hairs in contrast with a smooth and shiny integument. Some specimens have a shorter pilosity, as well as a slight propodeal angulation in lateral view.

Hernandez et al. (2017) - An experimental study of colonies of A octoarticulatus living in domatia of the ant-plant Cordia nodosa showed the ants benefited from having ready access to herbivory prey found on the plant. This study highlights the mutualistic nature of the ant-plant relationship in that it demonstrates benefits for the ants in their performing a service for the plants, i.e., foraging upon insects and thus removing plant herbivores. Colonies with ready access to insect prey were able to produce heavier workers and this in turn correlated with a greater investment in reproductives. Colonies that were deprived of protein for long periods of time were found to be more eager to seek out protein resources than colonies with unfettered access to this source of insect prey. This suggests, as has been shown with other insects, that colonies seek out nutrients that are lacking in order to balance their diet. Bacterial assemblages between colonies with access to herbivores and those without did not show any difference in their gut flora (bacterial assemblages). This suggests gut flora are not being adjusted as a means of compensating for dietary differences.

From the observed material it can be said that a gradation exists in terms of propodeal shape, from convex without angles and teeth, to highly angulate (in lateral view). On the other hand the posterior and basal propodeal faces can be simple or with a pair of lateral carinae. In the few observed females and the observations made by Wheeler (1942), it seems that the propodeum is also variable, from rounded and continuous to toothed, with the female in an intermediate condition. I prefer to interpret these observations in the sense of Allomerus octoarticulatus as a variable species. It is possible that it is really a complex with several species, but this can only be determined with more material and the observation of types.

The scarce female material shows pilosity variation as well, from sparse to moderate pilosity, with the absence of erect hairs on the propodeum, petiole and postpetiole. The orientation of the opening of the spiracle and the anteroventral petiolar process can also differ, but as the material is scarce it is difficult to make decisions. 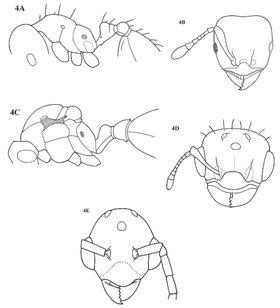 Head wider than long. Antennae 10 segmented with a poorly defined 4 segmented club. Eyes prominent, closer to the anterior head margin than the posterior border. Propodeum without teeth or spines, slightly convex to slightly angulate. Propodeal spiracle directed towards side and posteriorly. Petiole robust, node longer than peduncle, joined continuously to petiolar dorsum. Petiole anteroventral process acute, without forming spine or tooth. Lateral propodeal areas with longitudinal striation. Body covered with conspicuous pubescence. Abundant hairs (approximately as long as the last antennal segment) over head and some over propodeum, petiole and postpetiole. Abundant shorter hairs (approximately as long as penultimate antennal segment) over mesosoma and dorsum of gaster. Brown, with darker head and most of gaster; pilosity white.