Rarely collected do to their subterranean habits, the few species of this genus have only revealed mere hints about their biology.

The eyes are absent. The body is small and thin (less than 2.8 mm long) and uniform pale yellow in color. Similar to Solenopsis but differs in having a three-segmented rather than two-segmented antennal club and in the complete lack of eyes. Solenopsis have small eyes. Also similar to Leptanilla because of their elongate body and lack of eyes. Differ by the presence of frontal lobes that partially cover the antennal sockets. Similar to Dolopomyrmex (United States) but Anillomyrma lacks the median clypeal seta. (Shattuck 1999 and Eguchi et al. 2009)

Bolton (1987) - This distinctive small genus contains only two species and one subspecies, the last probably synonymous with the type-species of the genus. As Wheeler (1927b) suggested, Anillomyrma is most closely related to Bondroitia, sharing characters of mandibular structure, lack of eyes, close approximation of frontal lobes and antennal insertions, very narrow median clypeus which lacks longitudinal carinae, enlarged fore coxae, and conspicuously flattened promesonotal dorsum. Habitus of the two genera is also similar. Anillomyrma and Bondroitia together separate from the remainder of the Solenopsis-group by their joint possession of strongly crossing mandibular blades, lack of eyes, flattening of the alitrunk dorsum, lack of clypeal carinae on median portion of clypeus (Diplomorium and some Neotropical taxa lack carinae but here the clypeus is broad), very closely approximated frontal lobes (similar in the Monomorium fossulatum-group), lack of a subpetiolar process, and enlarging of the fore coxae.

The two genera are separated by the following characters in the worker.

It is possible that some similarities of Anillomyrma and Bondroitia are superficial and due to morphological convergence through the similarity of their lifeways. In particular this may apply to their loss of eyes and the flattening of the dorsal alitrunk. However, the form of the mandibles, the narrowing of the median clypeus with close approximation of the frontal lobes, the disappearance of the subpetiolar process and the increase in size of the fore coxae appear to be valid synapomorphies isolating these two genera from the remainder of the genus-group.

Accepting that Anillomyrma and Bondroitia together form a holophyletic grade within the Solenopsis-group on the strength of the characters just mentioned, then of the nine characters tabulated to separate the two genera those apomorphic in Anillomyrma are (1 ), (2 ) and (5 ) by reduction and (3 ), (7) and (8) by development; whilst those apomorphic in Bondroitia are (6 ) and (9) by reduction and (4 ) by development, as compared to the remainder of the genus-group.

Eguchi et al. (2009) - K. Eguchi and V.T. Bui collected workers of Anillomyrma decamera in a well-developed dry forest in the southern coastal part of Vietnam, by underground bait-trapping; baits (pork sausage) were buried in sandy soil. On the other hand, J. Caceres, a colleague of D.M. General, collected A. decamera in abandoned agricultural land that had isolated stands of abaca plants (Musaceae: Musa textilis NÉE) and jackfruit trees (Moraceae: Artocarpus heterophyllus LAM.), and was overgrown with tall grasses, upright and creeping bamboos and tree ferns. Ant samples were obtained by sifting a soil core sample taken from a deep sandy loam of volcanic origin. Bolton (1987) collected A. tridens on sandy ground in a lowland rain forest. These facts suggest that the distribution of this species may be affected by soil type. Emery (1901) mentioned that the type material of A. decamera was collected from termite nest(s). Anillomyrma may actively hunt soil invertebrates, including termites, using its well-developed sting to envenomate prey, and it may also scavenge animal matter under the ground. Bolton (1987) tentatively suggested that A. tridens is nomadic. These scattered observations may help us to develop collecting and observing methods for these mysterious ant species.

Bolton (1987) - Very little is known of the biology of this genus. The few samples of decamera which are known were taken in soil or litter samples, or from termite nests, the occupants of which may or may not constitute the normal prey of the species. A. tridens was discovered in Sarawak crossing a small forest path by means of a covered runway in the topsoil. The runway was very conspicuous where it crossed the path and consisted of a narrow shallow groove in the soil which was covered by a canopy of small soil particles, concealing the ants moving along inside the tube thus formed. On disturbing the soil of the runway large numbers of minute yellowish ants poured out to investigate. Handling these tiny ants proved to be a mistake as they use their stings freely and, though minute, they are capable of penetrating the skin and delivering a painful sting out of all proportion to the size of the ant. The ant runway was revisited a few hours later and workers were still moving along within though no trace of sexuals or brood could be found.

I am unable to say whether this movement represented a nest transfer or whether A. tridens is nomadic, but the ant runway was not on the forest path the day before its discovery and was deserted the day after, and shortly after that was washed away by a downpour. The site of the runway was checked periodically for the next couple of weeks but the ants never returned.

Yamane & Jaitrong (2019): The male is characterized by the following features:

Eguchi et al. (2009) - By the combination of the characteristics marked by asterisks, Anillomyrma is distinguished from the other genera of the Solenopsis genus group (sensu Bolton 2003). Worker monomorphic. Body extensively depigmented, weakly sclerotized (easily shrunk when dry-mounted). Head longer than broad, without preoccipital carina; frontal lobe in full-face view only partially concealing torulus, not extending posteriorly as frontal carina; antennal scrobe absent; median portion of clypeus only weakly expanding anteriad and distinctly raised above the level of lateral portions, *not bicarinate laterally below antennal insertion, *narrowly inserted between frontal lobes; median clypeal seta well developed; 1st paracarinal seta well developed; lateral portions of clypeus not forming a raised rim or shield wall in front of antennal insertions; anterior tentorial pit located at the midpoint of antennal insertion and lateral margin of head in full-face view; mandible elongate-triangular, with 3 or 4 distinctly dark-colored teeth on masticatory margin but without any tooth / denticles on basal margin; a short diastema present between the preapical and 3rd teeth; trulleum small and closed; hypostoma without lateral tooth just mesal to each mandibular base; anterior margin of labrum broadly concave medially; *both maxillary and labial palps consisting of two completely separated segments (not consisting of two semi-fused segments, as previously reported ); praementum with a pair of long and simple setae; *antenna 10-segmented, *with | 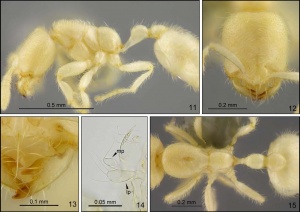