Known only from eastern Haiti. The types were collected from small colonies under rocks in shady places. Brown (1978) believed they are likely to be nocturnal foragers.

Summarized from Brown (1978): Distinguished from other emarginatus group species by its shorter mandibles (MI < 67) with fewer teeth and denticles along the inner preapical margins. More or less yellow in color. Distinguished from the similar Anochetus longispinus by its acute petiole teeth that are < .01 mm long.

Not much is known about the the biology of Anochetus haytianus but we can presume that its biology is similar to other Anochetus species. The following account of Anochetus biology is modified from Brown (1968):

Habitat. The places where Anochetus live are varied. Where they penetrate into the temperate zone, most species excavate nests in the earth. Occasionally the nest is dug under a covering rock. In the tropics, many nests are also dug in the soil, but in moist forested areas, a common site is the soil beneath a rotting log or other large mass of rotting wood, with extensions of the nest into the log itself. Another frequent nesting site in tropical forest is in the humus and leaf litter at the base of large trees, particularly between buttress roots. Anochetus species of medium or small size often nest in small pieces of rotting wood or bark, or even small rotting twigs or seeds and nuts lying in or on the forest litter. Some species tend to choose more arboreal nest sites.

Diet. Foraging for living animal prey takes place on the soil surface, within the soil-humus-log mold matrix, or on the trunks, branches and foliage of trees and plants wherever these are available. Fragmentary evidence indicates that most epigaeically foraging tropical Anochetus tend to do their foraging at dusk, at night, or during dawn hours. I found Anochetus africanus walking on tree trunks only at night in the Ivory Coast. Some species, particularly those with red heads or other aposematic coloration, apparently forage in the open more during the day. No systematic comparative study has yet been made of foraging hours for different species.

The food of Anochetus consists principally of living arthropods caught and killed or incapacitated by the ants. The smaller and more delicate species Anochetus inermis has been observed by me in a laboratory nest. The colony came from a piece of rotten wood from the floor of a wet ravine near Bucay in western Ecuador. The colony was fed with small tenebrionid beetle larvae (Tribolium castaneum), comparable in size to the A. inermis workers, and the latter attacked the prey with their mandibles in the familiar snapping manner, but very cautiously and nervously, with stealthy approach, extremely rapid strike, and instant recoil-retreat. After several attacks of this kind, with intervening periods of waiting, during which the beetle larvae fled, rested, or writhed about in distress, an ant would finally attack with its mandibles and hold them closed on the prey for long enough to deliver a quick sting in the intersegmental membrane. After this, the prey appeared to be paralyzed, or at least subdued, and sooner or later was carried off by the ant to the nest, and eventually placed on an ant larva.

Frequent delays and excursions before the prey are finally immobilized and brought to the ant larvae in the nest may well have the function of allowing time for protective allomones of the prey to dissipate. Many tenebrionid adults, including Tribofium, possess potent quinonoid defensive allomones, but the larva is not known to possess quinones in this genus.

Nuptial flight. Although males of different species of Anochetus are commonly taken at light, other species are not. Stewart and Jarmila Peck gave me Malaise trap samples taken in western Ecuador that contained males of several species, but Malaise traps capture both day- and night-flying insects.

Defense. When a nest of any of the larger Anochetus species is breached, some of the workers immediately hide beneath leaves or other objects, while other workers rush about with open jaws, which they snap at foreign objects, or even at leaves and twigs, with an audible tick. On human skin or clothing, a worker will snap her jaws and hold fast to the surface with them, at the same time quickly bringing her gaster around to sting. The sting is long and strong, and to me the effect is shocking and quickly painful.

Most of the smaller and medium-sized Anochetus species feign death when disturbed, crouching flat against the surface, or rolling themselves into a ball and remaining still, often for a minute or more. Only when held do they sting. Their stings can be felt in most cases, but the effect is usually trifling.

Differing from emarginatus Fabr. in the following structural characters: The head is much broader behind, the mandibles shorter, with fewer (4 to 5) denticles on their inner borders and slightly shorter apical teeth. The antennal scapes and all the funicular joints are distinctly shorter, the former extending less than one quarter their length beyond the posterior corners of the head. The epinotum is quite unarmed, low and rounded in profile. The petiole is more erect, with subequal anterior and posterior declivities and at the summit with two teeth which are longer, more acute and more diverging than in emarginatus.

Hairs very sparse as in emarginatus and confined to the mouth and gaster.

Color brownish yellow, legs, mandibles and antennae paler, the tint throughout being lighter than in emarginatus subsp. testaceus Forel. 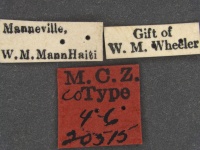 Described from a number of specimens taken at Manneville and in the mountains north of Jacmel from small colonies nesting under stones in shady places.