Anochetus mayri is widespread and regularly encountered in Central and South America. It is found mostly in forests under stones, in moss on rocks or logs, in rotten twigs on the forest floor, or in larger bodies of rotten wood. Colonies are small, often with only a few workers. The workers and queen feign death, and are difficult to see (Brown, 1978; Smith, 1936). It has been introduced into southern Florida where it is found in leaf litter and hollow twigs (Deyrup, 2002).

In the Neotropics there appears to be a confusing array of species similar to A. mayri, some of which may be geographic variants of that species (Brown 1978). There is some evidence that males may provide useful characters for separating the species in this complex (Brown 1978). We presume that the Florida population is derived from the West Indies. Florida specimens appear identical to specimens we have seen from Puerto Rico and St. John (the type locality is St. Thomas). In the U.S. there is no likelihood of confusing A. mayri with any other species, unless more Anochetus species are introduced.

This species has been introduced from the Neotropics into Florida where it is a rare species in leaf litter and hollow twigs in Dade county (first found in 1987), and also Palm Beach Co. (found in 2002) (Deyrup 2002). It seems likely that the species will expand its range, as Dade and Palm Beach counties have numerous nurseries for tropical and subtropical plants, as well as a population of mobile humans who take their landscape plants to new residences. 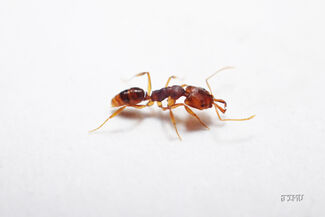 This widely distributed species is found in leaf litter where it is a predator of smaller arthropods. Collection of this species in Florida was detailed by Deyrup (2002). Individuals were found to be common in deep litter at the base of pines and oaks in an environmental teaching facility in West Palm Beach Co. The ant was not a dominant species (in terms of abundance), and was neither aggressive nor strongly defensive.

From Jones et al (1999) - Head extracts of A. mayri have been shown to contain 2,5-dimethyl-3-isoamylpyrazine and 3-methyl-4-phenylpyrrole. These compounds most likely are mandibular gland products and have a pheromonal role.

This species was described in as much as it was included in a key. "Mandibole terminate con tre denti distinti, dei quali l' intermedio piu piccolo. Squama del picciuolo troncata superiormente o bidentata, metanoto con due denti. Squama con due denti." (Mandibles terminate with three distinct teeth, with the intermediate being smaller. The upper scale of the petiole truncated or bidentate, metanotum with two teeth. Scale with two teeth.)