Collected from moist forests, nests have been found in a clay bank and a rotting log. 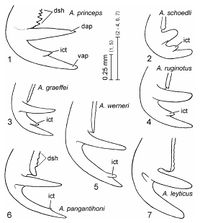 Zettel (2012) - Philippines: Anochetus princeps is unique among all Philippine Anochetus species by the structure of the mandible as described in the key and illustrated in Figure 1. It belongs to the A. rugosus group (Brown 1978).

Anochetus princeps was described from Java, as well as its synonyms A. jacobsoni and A. serratus. Other synonyms, A. princeps var. laeta, and A. jacobsoni var. taipingensis are from Sumatra and West Malaysia, respectively. Brown (1978) presented the first record of A. princeps from the Philippines: Mount Makiling, Laguna Province, Luzon Island. I have examined one worker from the same mountain. As already noted by Brown (1964), some allopatric populations of A. princeps may turn out to be biological species. Compared to specimens from West Malaysia (CZW, NHMW), the Luzon worker has a more strongly elevated anterior rim of the mesonotum, but otherwise it agrees very well, despite its isolated record. In contrast, specimens from Myanmar and Thailand (CZW, NHMW) may belong to an undescribed species, because they differ considerably in pronotum sculpture and head shape.