The rain forest understory tree Leonardoxa africana (Fabaceae: Caesalpinioideae), which is a complex of four allopatric subspecies, has a range that extends from Gabon northward through coastal Cameroon to extreme southeastern Nigeria. Geographical variation of biological traits in the L. africana complex concerns principally characters linked to interactions with ants. Of the four subspecies, three are myrmecophytes. Two key plant characters shape interactions with ants.

1. Extrafloral nectaries provide food (as a sweet liquid). Nectaries are present in all four taxa but are largest and most numerous in the highly specialised myrmecophyte L. a. subsp. africana. In this subspecies, extrafloral nectar is the principal or even sole food source (McKey 2000).

2. Swollen hollow internodes (termed domatia), present only in the three myrmecophytes, provide nesting space for specific symbiotic ants. The evolution of these traits has been driven by interactions with ants, which patrol young leaves of the tree and protect them from phytophagous insects (Gaume et al. 1997; Gaume and McKey 1998). The subspecies L. a. africana, found in the coastal rainforests of Cameroon, is associated with two host-specific symbiotic ant species, the formicine Petalomyrmex phylax and the myrmicine Cataulacus mckeyi. Petalomyrmex is engaged in a mutualistic interaction with 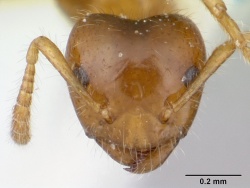 the plant (Gaume et al. 1997), while workers of Cataulacus use the host-plant but do not protect young leaves (Gaume and McKey 1999). Because Petalomyrmex occupied trees are better protected, their growth and survival are superior to those of Cataulacus occupied trees, giving P. phylax an advantage in occupation of nest sites. Only one colony of one ant species can be found on a single tree. C. mckeyi often colonises juvenile trees that have lost their initial associate P. phylax, as a result of injury to the tree caused by disturbance. Once C. mckeyi occupies a tree, it can temporarily exclude P. phylax, thereby slowing the recolonisation of the tree by the mutualistic ant and depriving it of protection against phytophagous insects. Thus, C. mckeyi can be considered a parasite of an ant-plant mutualism (Gaume and McKey 1999). The distribution of L. a. africana is patchy and a patch (“population”) often comprises between 100 and 500 trees. The distance between two populations can be as small as 50 m, but is more often hundreds of meters. Each tree is occupied by a single nest of a single ant species, except for some rare transitional cases. On average, 75% of available trees are occupied by P. phylax, while frequency of occupancy by C. mckeyi varies from 0 to 30% of trees. By “available trees” we mean trees of height = or > 25 cm and bearing at least five or six domatia, because new shoots smaller than this were never observed to be occupied (G. Debout and D. McKey, unpublished observation). A colony of P. phylax can reach up to 10,000 workers, while a colony of C. mckeyi comprises some hundreds of individuals only (Gaume 1998).