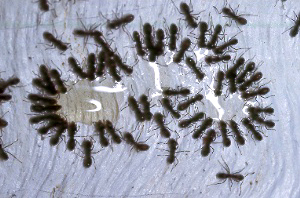 Ants are attracted to any suitable food source, including those in our homes and gardens.

Ants cause problems primarily when they forage in buildings for food or water and when they construct nests in buildings and gardens. When searching for food, they can be attracted to a wide range of products with different species preferring sweets, meats, fats or oils. They will also search indoors for water during dry periods. When desirable items are found many species will recruit fellow nest mates to help gather the food and return it to the nest. This can result in large numbers of ants appearing over a short period of time. Ants can be a nuisance when attempts are made to establish plants through direct seeding. Workers will forage for the newly planted seeds, removing them to their nests and causing reduced germination.

Some ants build nests in walls and foundations, or indoors in potted plants, enclosed areas, and even in cavities in toilets and sinks. In almost all cases nests are limited to pre-existing cavities or spaces between objects or in rotten wood and seldom will ants attack solid structures. Thus they generally will not cause structural damage to buildings but will take advantage of existing deterioration.

Outdoors, nesting activity can result in excavated soil being deposited in gardens and on brickwork. In most cases this causes little property damage but some species, especially species of Aphaenogaster, can form large numbers of chambers close to the surface. These chambers can cause soil to become soft and uneven, causing serious problems when found in golf courses or some types of pastures or crops. A few species will occasionally attack electrical wiring, apparently being attracted to either the insulation or the magnetic fields produced by the wires. In these situations extensive damage has occurred.

Ants often move nest sites when disturbed, or with a change in food supply. This can make control and remove of ants difficult. They may leave for short periods only to return later when a new food source is located and they can recolonise from nearby nests very quickly.

Several species of ants pose serious health threats to people who are sensitive to their stings. These include species of Myrmecia in southern regions and Odontomachus in northern areas. In extreme cases hospitalisation may be required. Other species are known to carry diseases and can pose a threat in hospitals and veterinary clinics (some introduced species of Monomorium and the Argentine ant, Linepithema humile). Fortunately these cases are uncommon in Australia and in general ants are mainly a nuisance pest rather than a health problem.

An out of date but excellent account of pest ants of the Eastern US is: