Blepharidatta brasiliensis have small colonies of less than 150 workers that can contain multiple ergatoid queens. It can be a relatively common ant in some places where it occurs.

Kempf (1967) - Following are the characters that distinguish Blepharidatta conops from Blepharidatta brasiliensis: larger size; darker color; pilosity more abundant with hairs present also on ventral surface of petiole and postpetiole; clypeus with a pair of prominent tubercle; vertex with a broad sagittal furrow flanked by a pair of low and diverging ridges; occiput separated from vertex by a carina; dorsum of head lacking longitudinal rugae; occipital corners broadly and obliquely truncate and bidentate; eyes strikingly conical; antero-inferior corner of pronotum bidentate; epinotal spines relatively shorter, less approximated at base and less diverging at apex; infraspinal lamella with an upper spine and a median lobe; petiole rather cylindrical than clavate without a differentiated node; gaster entirely covered with microsculpture, never partly smooth and shining. According to Wheeler (1915: 485) brasiliensis has only 4 teeth on chewing border of mandibles. But according to my observation, both brasiliensis and conops have 5 mandibular teeth.

Brandão et al. (2015) - Diniz (1994) studied B. brasiliensis biology in a Manaus city development (Conjunto Acariquara), at the University of Amazonas campus and also at the Reserva Ducke. He observed the ants using rolled fallen leaves and natural cavities in rotten logs as nesting sites; in half out of the eight examined nests, he found insect carcasses around the nest openings. Worker populations of the eight colonies Diniz collected ranged from 49 to 117. One colony had only a single ergatoid gyne, while the others had 3–14 ergatoids; males ranged from 0 (four colonies) to 12. Diniz (op. cit.) listed the items found in pieces or sometimes in whole bodies around collected nests of B. brasiliensis: spiders, diplopods, orthopteroids, beetles, flies, unidentified Hymenoptera and ants of the genera Camponotus, Cephalotes, Crematogaster, Dolichoderus, Ectatomma, Nesomyrmex, Pachycondyla, Pheidole, Pseudomyrmex, and Solenopsis. Diniz observed at least once the migration of a colony from one rolled leaf to another, with workers also transferring the carcasses found within and around the nest opening. He also observed that workers keep the larvae in between the mandibles while inside the nest. In two nests, Diniz (op. cit.) recorded isopod inquilines that suffered no hostility from the workers.

Rabeling et al. (2006) described the non-homogeneous nest distribution of B. brasiliensis in a locality near Manaus, AM, Brazil (EMBRAPA campus). The colonies occupied either cavities within rotting branches (more commonly) or natural spaces between leaves (19% out of 26 studied nests), apparently taking advantage of pre-existing cavities, reducing the cavity size, if too large, or sealing it by means of a chamber wall, built from a mixture of soil, vegetable debris, and insect parts. According to them, “B. brasiliensis appears to take advantage of pre-existing cavities, which were only slightly modified by them. The shape of the main chambers was amorphous ellipsoid to round and had an inner dimension of 4 cm length by 1.5 cm width. If pre-existing cavities in branches were too large or the nest was located between leaves, the ants had reduced the nest volume by constructing chamber walls, built from a mixture of soil, vegetable debris, and insect parts in order to seal off the nest chamber.” As in Diniz (op. cit.), they also observed that colonies were polygynous with one to eleven ergatoid gynes and with 132 workers on average (SD = 95.63). Nests contained large numbers of brood (roughly 75% larvae and 25% pupae), which were kept lying on the bottom of the nest chamber. If a colony was disturbed, workers picked up the immatures and held them between their mandibles. The colonies they studied appeared to be mostly active at night and to be omnivorous, scavenging or preying on beetles, bees, cicadas, crickets, termites, spiders, and ants of the genera Cephalotes, Pheidole, Camponotus, and Pachycondyla. The victim’s legs and antennae were cut off before being dragged to the nest. Blepharidatta brasiliensis may also collect nutrient-rich plant structures, such as seeds or elaiosomes, in addition to the arthropod diet.

Franken et al. (2013) recorded B. brasiliensis in the litter trapped around Attalea attaleoides (Barb. Rodr.) Wess. Boer palm bases, which is a refuge for non-dominant ant species because aggressive species in these microhabitats are relatively rare. The trapped litter was occupied mostly by unaggressive predatory and fungus-growing species, which probably find more prey or better conditions to cultivate their food there.

Blepharidatta brasiliensis may be rather frequent in some Amazonian areas; for instance, Oliveira et al. (2009) recorded B. brasiliensis in 8.7% of the 850 pitfall traps and sardine baits set in 30 plots and from litter sifting (Winkler sacks) in 25 plots at Reserva Ducke in Manaus (the 5th most frequent ant species out of the 152 recorded in the area).

Head nearly 1/3 longer than broad, narrower in front than behind, with strongly and broadly excised and marginate posterior border and nearly straight lateral borders, its dorsal and gular surfaces feebly convex, its posterior corners produced as prominent angular tubercles. Scrobes of nearly uniform transverse diameter throughout their length and sufficiently deep to accommodate the antennae. Frontal carinae expanded and lobular anteriorly, with translucent and slightly reflected borders throughout their length. Mandibles rather large, with moderately convex external borders, the apical borders rather oblique, with four subequal teeth. Clypeus with evenly rounded, entire anterior border, Battened in the middle between the two prominent longitudinal carinae and transversely impressed at the anterior border. Frontal area semicircular. Antennae slender, scapes reaching nearly to the posterior corners of the head, their apical halves distinctly thickened; first funicular joint large, fully twice as long as broad; joints 2-7 narrower, a little broader than long, joints as long as broad; joint 9, the basal joint of the clava, longer than broad and twice as broad as the preceding joints; terminal joint large, pointed, nearly three times as long as broad. Thorax narrower than the head, more than twice as long as broad, broadest through the humeri, in profile more than twice as long as high, feebly and evenly convex above. Pronotum with acute, dentate anterior corners, from which there run a pair of distinct longitudinal ridges, gradually converging posteriorly to the epinotal spines. Each of these ridges bears two minute teeth. Epinotum sloping, concave in the middle,. marginate on the sides below the spines, which are long, straight, acute, close together at their insertions and directed backward, outward and upward. Metasternal angles thin, translucent, broad and sharply angular above. Petiole fully three times as long as broad or high, with a short distinct peduncle in front and constricted behind the node, which is evenly and feebly convex above; seen from above the segment is broadest at its posterior margin. Postpetiole a little broader than the petiole but scarcely higher, from above rectangular, a little broader than long, in profile feebly convex above. Gaster subcircular from above, with straight basal margin.

Hairs yellowish; those on the upper surface of the body very long, slightly curved, of uniform thickness and blunt, arranged very regularly in pairs. On the head nearly all of them arise from the edges of the frontal carinae where the insertion of each hair is a minute tubercle; on the thorax the hairs are inserted along the ridges connecting the humeral angles with the epinotal spines. The petiole bears three, the postpetiole two pairs of these peculiar pairs. On the gaster there are four regular equidistant rows, with about six hairs in each row. Each fore coxa hears a single long hair and there is a pair of hairs on the gula. Legs, antennae, alid terminal gastric segments with numerous, short, appressed pointed hairs and the dorsal surface of the gaster also with a few scattered reclinate hairs.

In general, body covered by sparse hairs; hairs stiff, long, slightly curved, uniform in width, and truncate; some of them in pairs. Dorsum of mandible with subdecumbent to appressed flexuous short hairs; frontal carina with 6– 7 regularly spaced and upwards bent hairs. Dorsum of petiolar node and postpetiole with sparse hairs, mostly in pairs; ventral face of petiole devoid of hairs; ventral face of postpetiole with a single pair of hairs. Anterior face of coxa with a long and erect hair. Legs otherwise covered by appressed small pilosity. 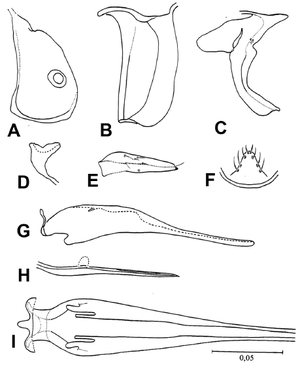 Cephalic occipital corner tuberculate in frontal view. Scape and funiculus partially lodged in scrobe, which is not wide enough to receive whole scape; frontal carina does not cover scrobe, internal area of scrobe visible even with the head in frontal view; convex compound eye with about eight to nine facets along maximum diameter. Ventral face of head slightly convex, head wider anteriorly than rest in lateral view.

Note: This is probably the male of brasiliensis, already known in the worker caste from Para and Amazonas State in Brazil and from Cordoba in the Argentine.

Brandão et al. (2015) - (modified from Wheeler & Wheeler, 1991, which based the description on 12 larvae from Alto Mavaca, Amazonas, Venezuela). With the characters of Blepharidatta larvae but with few head hairs, all very short except for the two near midline. Hypopharynx with minute spinulae in arcuate rows.