This species was collected in Denizli and Burdur between 807 m and 1831 m altitude from a mountain meadow and Pinus nigra, Juniperus spp., and mixed (Pinus nigra and Quercus coccifera) forests.

Seifert, 2019: See key. Within the species having significant reddish pigmentation components on vertex, the species is well separable by a combination of long scape, strong extension of scape base and large width of dorsal propopodeal plane. A typical, or frequent, coloration is head, mesosoma and petiole reddish brown and gaster blackish.

Only known so far from eight localities in the Denizli and Burdur provinces of Anatolia between 800 and 1850 m altitude (Seifert, 2019). 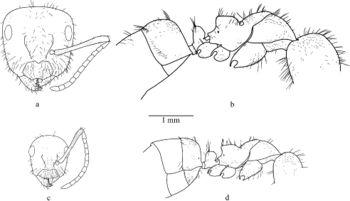 This name is derived from the Honaz Dagi National Park, where this species was collected.