Strict nocturnality in both C. mirabilis and Camponotus longipilis contrasts with diurnality in other bamboo specialists. Established colonies occupy multiple culms of Guadua bamboo after workers chew entrances in young stems prior to lignification. Foundresses of C. mirabilis appear to initiate their colonies by invading Camponotus longipilis nests and taking over established coccid populations, a major source of food (honeydew).

A member of the subgenus Myrmostenus.

Mackay (1997) - This is the most common species in the subgenus, and is also easily differentiated from all others. The head is greatly elongated and noticeably widened anteriorly. The occipital corners are strongly angulate as seen in full face view. The clypeus is nearly flat, with little evidence of a raised region in the area of the clypeal carina. All of the surfaces, including the dorsum of the head, are strongly polished.

This species is at the other extreme from Camponotus leptocephalus in terms of its morphology. The head is startling in view, greatly elongated and slender. The ventral surface of the head lacks erect hairs. The entire surface is shiny. The occipital angles are well differentiated from the remainder of the head.

Davidson et al. 2006 - Most inhabited bamboo culms contained no queen, and we never observed more than one queen per patch of culms. Consistent with polydomy and monogyny, nocturnal columns of workers regularly transported brood, each other, and coccids among neighboring live culms; winged females occasionally commuted alongside nestmates.

Entrance of C. mirabilis nest in bamboo. Size variation among workers is evident. From Villa Carmen, near Pilcopata, Peru. Photo by Christian Peeters.

C. mirabilis is distinctive among bamboo ants in foraging aggressively for prey in the leaf litter (prior to seasonal flooding). This trait may explain restriction of C. mirabilis colonies to lower culms.

Workers were never observed to actively transport water from occupied culms, an in Tetraponera attenuata. Instead, nest modifications led to passive “self-bailing”. Rather than accumulating inside, water added to higher entrances drained rapidly from lowest entrances, most of them basal in internodes. 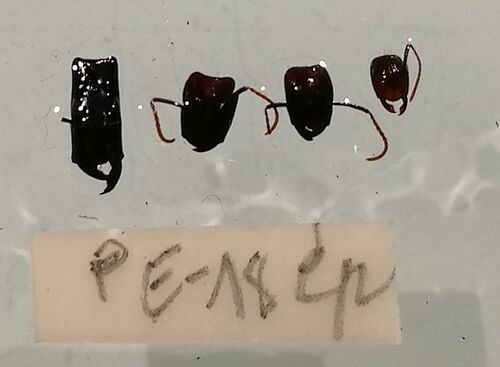 Hairs erect, long, coarse and sparse on dorsum of head, pronotum, scutum and scutellum, propodeum, node of petiole and gaster; decumbent pubescence very weak and sparse on most surfaces.

Sculpture weak, shiny and polished on most surfaces.