It forms rather small colonies and is exquisitely arboreal in its habits. On Key Largo and at Card's Point, I found it nesting in epiphytic Tillandsias in mangrove thickets; at Miami I saw a fine colony nesting under a piece of loose bark on the trunk of a living tree. (Wheeler 1910). It is a general predator and scavenger, and tends honeydew-producing Homoptera. Nests are in hollow branches and in abandoned termite galleries (Deyrup, Davis & Cover, 2000).

In the field Camponotus novogranadensis is easily mistaken for Camponotus planatus. Both species are dark-colored, non-glossy, and small (majors are about 5mm long). Camponotus novogranadensis is black, with brown or yellowish brown antennae, clypeus, and the sides of the face above the mandibles. Camponotus planatus is usually bicolored, dark red with a black gaster, but occasionally completely black. Under the microscope these two species are conspicuously different. The clypeus of C. novogranadensis has a strong, sharp, median ridge, absent in C. planatus. The mesosoma of C. novogranadensis is covered with small, semiappressed hairs and large, sparse, curved, proclinate hairs, that of C. planatus moderately densely covered with short, sub-erect hairs. (Deyrup and Belmont 2013)

This tropical species is widely distributed through Central America, Mexico and Cuba and enters the United States at the southern extremity of Florida and at the mouth of the Rio Grande del Norte. The Florida population is considered to be an introduction by Deyrup (1991) and Deyrup, Davis & Cover (2000). In Florida it is a common species in parts of Dade and Monroe counties, where it lives in tropical hardwood hammocks; also found sporadically in coastal counties north into Palm Beach on the East Coast and Hillsborough on the West Coast. Pest status: none. First published Florida record: Wheeler 1910.

Deyrup (1991): This species has always been considered a native in the Florida Keys, and was widespread at the time of the first list of Florida ants (Wheeler 1932). It is currently the dominant ant of most hardwood hammocks in the Keys. Nests are usually in dead wood, and it is easy to imagine C. planatus rafting to the Keys. It has always been difficult, however, to explain the absence of C. planatus from tropical hammocks on the mainland without invoking some strict ecological requirements existing only in the Keys. During the last few years I have found isolated well-established populations in Sarasota, Tampa and east Miami, and there are early records (Wheeler 1932) from Miami, Fort Myers and Coconut Grove. This suggests that the species is not confined to the Keys by highly specific habitat or climatic requirements, and shows that the species is moved about by humans. If it had been established in the Keys for thousands of years, it would have almost certainly become widely distributed through suitable habitats in south Florida. There are no other Antillean ants that are common in the Keys and absent from similar habitats on the mainland. 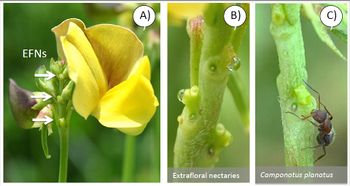 Deyrup, Davis & Cover (2000): At present this species is most common in the Florida Keys, where it is a dominant ant of tropical hammocks, including the best examples of hammocks on Key Largo. There are populations in several mainland sites, but it has not yet made significant inroads into the Everglades. It is probably a significant competitor of native ants and other insects that live in wood, and its activities as a predator and a guard of sap-sucking insects should also have ecological importance.

Aguirre-Jaimes et al (2018) found C. planatus was the most common visitor to extrafloral nectories at the base of the inflorescences of Vigna luteola (Fabaceae) in a gulf coast study site (southeastern Veracruz, Mexico). It has been estimated 50 species of plants (16 families, 31 genera), representing 5% of the local flora, have extrafloral nectories in the coastal dune vegetation where this study was conducted.

Head small, as broad as long, a little broader behind than in front, with straight posterior and convex lateral. borders and rounded anterior corners. Eyes rather large, moderately convex. Mandibles 6-toothed, with convex outer borders and upper surfaces. Clypeus sharply carinate, broadly rounded in front, with the anterior border feebly sinuate in the middle. Frontal area distinct, subtriangular, much broader than long. Frontal carinae not very strongly lyrate, twice as far apart behind as in front. Frontal groove distinct. Antennae moderately long; scapes terete at the base, slightly enlarged distally, extending to the posterior corners of the head. Thorax short, a little narrower in front than the head, somewhat broader in front than behind, the dorsal surface evenly arcuate in profile, flattened when seen from above and marginate on each side, where it passes over into the somewhat concave, perpendicular pleural surface. Epinotum with subequal base and declivity, the former slightly convex and square, the latter distinctly concave, the two surfaces meeting with a rather sharp transverse margin. Petiole moderately high, compressed anteroposteriorly, with convex anterior, flattened posterior surface and rather sharp margin; seen from behind, narrow below, expanded above, with broadly rounded border, entire or feebly notched in the middle. Gaster of the usual shape. Legs rather short; tibiae without bristles on their flexor surfaces.

Opaque throughout, except the mandibles, which are shining, finely striated and coarsely punctate on their lateral and apical surfaces. Head, thorax and gaster densely punctate; legs coarsely shagreened. Cheeks and clypeus with large but rather shallow, somewhat elongated, scattered foveolae; gaster with coarse, sparse, piligerous punctures.

Hairs very abundant, erect, glistening white; covering the head, thorax, petiole and gaster, especially dense and conspicuous on the epinotum and gaster. Hairs on the legs somewhat shorter and more oblique; on the antennal scapes still shorter and more appressed. Pubescence on the gaster long and dense; much shorter and more dilute on the head and thorax.

Closely resembling the worker major, but the head smaller and with less convex cheeks and the petiole thicker and blunter.

Resembling the worker major, especially in the shape of the head. Thorax robust and flattened dorsally. Petiole broader and more compressed than in the worker major, its apical margin sharper and with a rather deep and broad median notch. Hairs much shorter and less glistening than in the worker, though abundant and erect. Wings rather short (7 mm); almost colorless, with pale yellow veins and dark brown stigma.

Pilosity much as in the worker minor, but less abundant. Scapes naked. Cheeks with a few blunt, erect hairs. Hairs on legs short, subappressed, longest and most conspicuous on the gaster. Pubescence apparently absent.

Black; mandibles, mouthparts, tarsi, genitalia and articulations of legs and thorax brownish. 'Wings like those of the female, but with even paler veins.