The following observations were made by Angela Shuetrim (pers. comm.) while collecting the type series on Mt. Finnigan, Queensland: “These ants are arboreal based on the nest I found. Nests are very difficult to locate but I was lucky enough to find one in a hollow cavity in a tree. The locality was in rainforest at high elevation, the lowest elevation where I found them being approximately 880m, and I never came across them in lowland rainforest areas. The vegetation changes frequently as you walk up the mountain and when you get to the right spot, and weather conditions are good, they can be found in high numbers running up trees along trails, and scattered across the rainforest floor.” (Shattuck 2005)

Shattuck (2005) - Minor. Dorsum of mesosoma with abundant, bright yellow enlarged hairs; metapleural gland present. The opening to the gland is large and highly visible, in fact as large as any known in the ants. 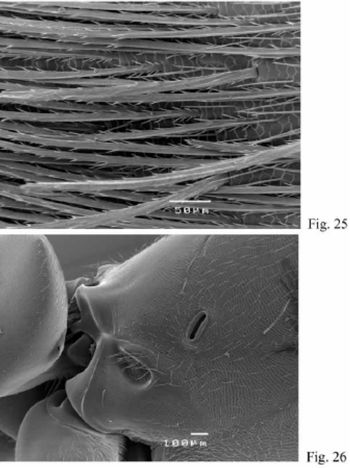 Shattuck (2005) - This species is unusual in that it is only the second species of Camponotus known to have a metapleural gland, the other being the South-east Asian Camponotus gigas (=Dinomyrmex gigas). The opening to the gland is large and highly visible, in fact as large as any known in the ants. This is especially noteworthy as none of the other species examined here show any indication of a metapleural gland being present. Also, thadeus is morphologically distinct from gigas, sharing few characters with it and with little indication that they are closely related. It is therefore highly likely that this gland has reappeared independently in these two taxa.

Minor. Posterolateral surface of head rounding gradually from the dorsal to lateral surfaces, the lateral surface weakly concave in smaller workers, convex in larger workers. Petiolar node forming a sharp angle dorsally and with a slight anterior tilt. Enlarged bright yellow hairs abundant on pronotum (except extreme anterior edge), mesonotum and gaster, those on the propodeum limited to near the angle; appressed pubescence present but sparse. Colour dark red-black to black.