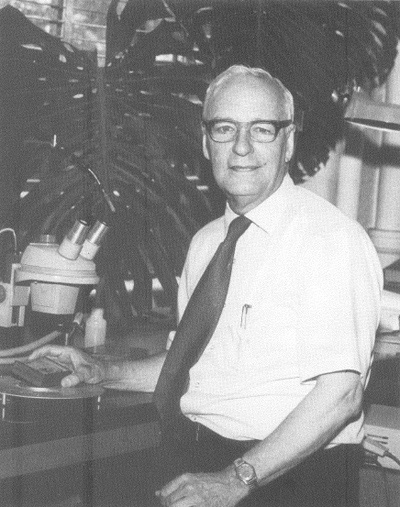 Frank M. Carpenter (1902-1994) received his PhD from Harvard University, and was curator of fossil insects at the Harvard Museum of Comparative Zoology for 60 years. He studied the Permian fossil insects of Elmo, Kansas, and compared the North American fossil insect fauna with Paleozoic taxa known from elsewhere in the world. A careful and methodical worker, he used venation and mouthparts to determine the relationships of fossil taxa, and was author of the Treatise volume on Insects. He reduced the number of extinct insect orders then described from about fifty to nine.

Entomologists David Grimaldi and Michael S. Engel consider him "the most influential paleoentomologist of his generation" (Grimaldi and Engel 2005 p.143)

Frank M. Carpenter (1902-1994) was born in the year that Sellards began his search for fossil insects at Elmo. Perhaps that was prophetic. Much that happened in Carpenter's life seemed to be so. Liz Brosius of the Kansas Geological Survey published a short biographical sketch about Carpenter ("The Collector", February, 1995, Earth, pp. 50-57) after becoming interested in him while editing his two volumes on the Hexapoda in the Treatise on Invertebrate Paleontology. She recounts how, at the age of 13, he encountered a photograph of a fossil butterfly, Prodryas persephone Scudder in the 1895 book Frail Children of the Air. She quotes Carpenter: "...And there was a picture of this fossil butterfly from the Florissant Shales of Colorado, with its wings outstretched and all the color markings. When I saw it, my eyes bulged. I told my father when he came home that night that what I wanted to do was work on fossils."

Carpenter lived in the Boston area, and in 1920 he was invited to attend a meeting of the Cambridge Entomological Club at Harvard's Bussey Institution. He was introduced to W.M. Wheeler, Professor of Entomology and Dean of the Bussey. When Carpenter told Wheeler that he liked fossil insects, Wheeler took him to his office, showed him drawers of fossil ants, gave him a few pieces of shale containing ant fossils, and a copy of the tour de force publication that had revolutionized the study of fossil insects, Anton Handlirsch's 1906 Die Fossilen Insekten. Carpenter entered Harvard two years later. When he learned that Scudder's collection of fossil insects was housed at the Museum of Comparative Zoology, he asked to see the collection. The first box he pulled from the drawers of the collection contained nothing other than Prodryas persephone! Brosius quotes Carpenter from an interview she conducted with him: "I never dreamed that I would live the rest of my life within 20 feet of that specimen."

In 1925, Carpenter and his professor, Percy Raymond, visited Elmo to scout for fossils. They found enough to decide an extensive expedition was warranted, even though the Yale group had told them that the fossils at the site had all been removed. Carpenter spent six months at Elmo together with two Harvard graduate students. He returned to Harvard with more than 2400 specimens.

Carpenter became THE expert on Elmo fossils. His works, definitive and comprehensive, did much to clarify understanding of the Permian insect fauna.

Sellards and Dunbar (the Yale expedition) had each collected about 2000 specimens at Elmo. Carpenter's 2400 brought the total number to 6400. In 1933, Carpenter wrote: "During the summer and fall of 1932...the writer was enabled by a grant from the Milton Fund of Harvard University to make an extensive trip to the central and western parts of the United States for the purpose of collecting fossil insects. One of the formations investigated was the Lower Permian limestone at Elmo, Kansas, where about two thousand specimens were obtained, bringing the total number of insects in the Harvard collection from this locality to some forty-three hundred." This would have brought the total for Elmo to 8300 specimens.

In 1939 Carpenter related: "In the summer and fall of 1935...the writer made another trip to the Lower Permian limestone at Elmo, Kansas and secured several thousand more insects for the Museum of Comparative Zoology. The Museum collection from this formation now exceeds eight thousand specimens." This brings the total for Elmo, all collections, to an incredible total of 12,000+, not including any miscellaneous specimens collected by local Kansas institutions.