The ‘‘silver ant’’ of the Sahara, the Sinai and the deserts of the Arabian Peninsula, this species has a polymorphic caste of workers and a monomorphic soldier caste.

Behaviour of workers around nest entrances, and exit of a soldier. Filmed in Djerba, Tunisia by Philipp Hönle

Leniaud et al. (2015) - The silver ant is common in the sand dunes of North Africa. This species has a polymorphic caste of workers and a monomorphic soldier caste. Colonies are large, with a widespread network of galleries, and queens and soldiers are usually located in the deeper parts of the nest. In mature colonies, soldiers represent only 1–2 % of the work force (S.Aron, pers. obs.). C. bombycina colonies are headed by a single queen that is mated with several males (Leniaud et al. 2013). The 2015 study examined the potential influence of genetics on caste determination. Reconstructing paternal genotypes from worker pedigree, they found that queens in the study population (Merzouga) had mated with 6–14 males. This is almost twice as high as the 5.7 males previously reported in the population of Amerzgane (Leniaud et al. 2013).

The contribution of each father in offspring production varied in all colonies, with some patrilines contributing up to 10 times more to worker and soldier progeny than other patrilines. In 2 of 7 colonies examined, the propensity to develop into the worker or soldier caste varied significantly between patrilines. Across all colonies, most patrilines produced both workers and soldiers. Collectively the results suggested a moderate genotypic influence to soldier caste determination in the silver ant. Environmental influences, especially trophic factors are believed to remain as the major determinant of caste determination.

In Merzouga, the ants live in the extremely dry sand dunes of Saharan desert. Colonies extend several meters deep and are exceptionally populous for the genus. In contrast, Amerzgane is a rugged area along the Atlas Mountains foothills; it receives more rainfall, nourishing wadis and valleys. The population occupies an old wadi facing south, and colonies are much smaller than in Merzouga. 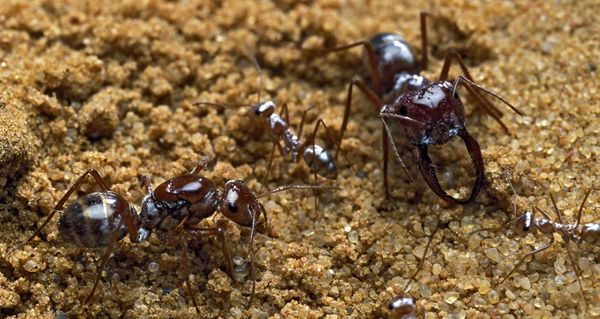 Unlike most other species in this genus, C. bombycina has large soldiers characterized by saber-shaped mandibles occurring together with winged queens and size-polymorphic workers. Molet et al. (2014) used morphometrics to show that the soldier caste exhibits a mosaic phenotype, i.e. combining queen and worker traits. Soldiers appear to function both for defense (specialized mandibles) and food storage (big abdomen). 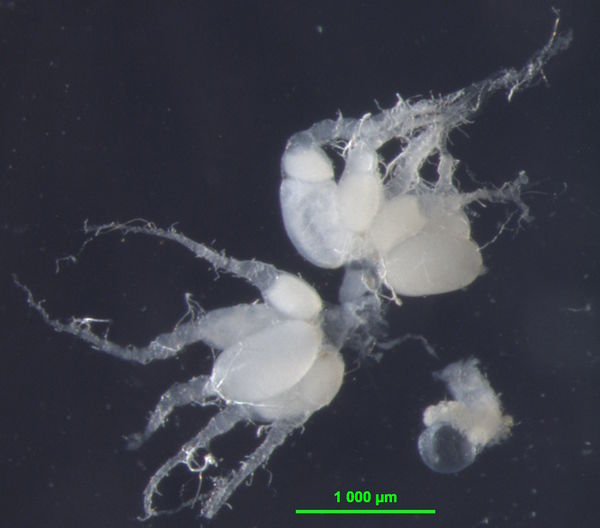 Ovaries of a soldier of C. bombycina, showing 10 ovarioles and presumed trophic eggs. The empty spermatheca can be seen lower right. Photo by Christian Peeters.