Nothing is known about the biology of Cataulacus lobatus.

A member of the huberi group. Cataulacus inermis is the closest related species to Cataulacus lobatus, but the former lacks propodeal spines and has distinctive transverse sculpturation upon the propodeal dorsum as well as the declivity. 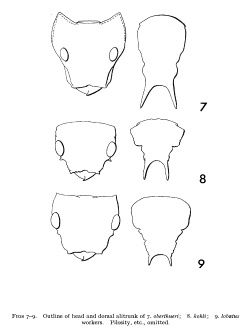 Occipital crest developed at each side but almost obliterated medially, visible only from certain angles, shallowly concave, unarmed. Occipital corners acute, almost right-angular but without differentiated teeth or denticles. Sides of head behind eyes irregular but not denticulate. Pronotum marginate, the margins expanded laterally but without teeth or denticles. Remainder of alitrunk not marginate, without denticles. Track of promesonotal suture represented upon the dorsal alitrunk by an extremely faint impression. Propodeum with a pair of short, narrow but acute spines. Petiole in dorsal view distinctly longer than broad; postpetiole divided into a pair of lobes dorsally by a longitudinal median impression. Sides of first gastral tergite marginate to the level of the spiracle; the margination most acute basally, rapidly becoming more obtuse nearer the spiracle itself.

Dorsum of head behind clypeus very finely reticulate-punctate with a faint, loose overlying rugoreticulum. The latter is strongest and most distinct behind the eyes but is very much effaced medially, in places virtually absent. Dorsal alitrunk similarly sculptured, the puncturation more marked than upon the head, and the sides of the propodeal dorsum with a few longitudinal rugae converging upon the bases of the spines. Propodeal declivity strongly transversely rugose throughout its depth. Dorsal surfaces of petiole and postpetiole coarsely longitudinally sulcate-rugose. First gastral tergite strongly reticulate-punctate with a few short rugulae.

Erect hairs absent from dorsal surfaces of head, alitrunk and gaster; present on the lateral margins of the head and the appendages.

Bolton (1974) - Holotype worker, CAMEROUN: Kriegsschiffhafen, 15.iii.1892 (Brauns) (MN, Vienna) [examined]. The holotype is badly damaged, with both the head and the gaster missing.