Found in forested habitats, little is known about the biology of Cataulacus voeltzkowi.

Amongst the species immediately related to Cataulacus intrudens, Cataulacus voeltzkowi is certainly the easiest to recognize. The unique form of the gastral sculpturation is unmistakable (Bolton 1974)

Known from Comoros, Madagascar and Mayotte.

Occipital crest not developed but vertex and occiput separated by an angle. Occipital corners with a small tooth and also with a smaller tooth flanking them upon the occipital margin; the latter usually bears a few very small dentic1es. Sides of head behind eyes denticulate. Pronotum marginate, equipped with a series of small dentic1es, or less commonly the margin with a serrate appearance. Mesonotum and propodeum each with one or two dentic1es laterally, the propodeum armed with a pair of flattened spines. First gastral tergite not marginate laterally.

Dorsal surfaces of head and alitrunk coarsely and closely reticulate-rugose, with a predominantly longitudinal direction upon the head, mesonotum and propodeum. On the pronotum however the reticulum is more complete and is not directional. The relatively small interspaces between the rugae are finely reticulate-punctate. Gastral rugae very regular and evenly spaced. In dorsal view all rugae originate at the base of the first tergite and initially run longitudinally. Those on the disc, however, terminate in the anterior one-third to one-half of the length of the segment. The laterally situated rugae then curve strongly around the apices of the discal rugae and run transversely across the remainder of the disc. The result is that if a median longitudinal strip of the tergite is examined the rugae thereon run longitudinally in the anterior portion and transversely in the posterior portion. Short, erect hairs are present upon all dorsal surfaces of the head and body, which may be inconspicuous upon the pronotum and mesonotum. 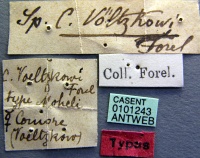