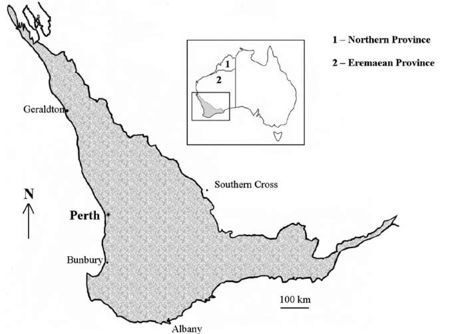 The southwest region of Australia is renowned for its biological diversity. (https://en.wikipedia.org/wiki/Southwest_Australia). Brian Heterick, working and living in this region for many decades, is the world's foremost authority of the ants of southwestern Australia. He has summarized his vast knowledge of the ants of this region in a wonderful publication: A Guide to the Ants of South-western Australia PDF: part 1, part 2.

Heterick begins by stating: The phytogeographic region in Western Australia known as the South-West Botanical Province is well known as a hotspot of mega-diversity for vascular plants (e.g. Beard et al. 2000). However, this region also has a rich ant fauna, with, for example, approximately ten times the number of ant species found in the United Kingdom.

The introduction then describes details of the ant diversity, some of which has now changed with revisions of various subfamilies and genera. Perhaps most importantly, there are more than 500 species present in the SWBP. The keys to species and the discussion of each genera and its constituent SWBP ant species include described species and what are stated to be "all the other morphospecies known from the Province that appear to constitute recognizable species, and are at present allocated voucher numbers in the Curtin Ant Collection. Many of the south-west ants (almost 50%) appear to be undescribed." The obvious problem one might immediately raise in seeing that this treatment of an ant fauna includes so many undescribed species: Wouldn't one assume there are potentially many other species, both undiscovered and undescribed present? The answer . . . "The paucity of novel taxa now being identified by Curtin staff and students, along with myself, suggests that additional species to those covered in this monograph are likely either to be very rare, or at the fringes of a distribution that mostly lies outside of the SWBP."

Seven botanical districts, identified by their own distinctive phytogeographic features, can be found within the SWBP. These are the Avon Wheatbelt (AW), characterised by open eucalypt woodland with areas of scrub-heath, the Esperance Plains (ESP), which is mainly mallee-heathland, the Geraldton Sandplains (GS), predominantly scrubheath with some taller trees, the Jarrah forest (JF), which originally was mainly medium-height eucalypt

forest but has now been much modified by farming and urban development, the Mallee (MAL), consisting of eucalypt shrubland, patches of scrubheath and a mosaic of woodland and mallee in the north-east, the Swan Coastal Plain (SWA), originally a mix of jarrah woodland, banksia low woodland, teatree swamps and thicket (Acacia, Allocasuarina and Melaleuca), but which, like the Jarrah forest, has now been much modified by urban development, and, finally, the Warren (WAR), a distinctive wet sclerophyll region of tall forest, including some of the largest trees in WA.

Since the publication of these keys:

The following 37 pages are in this category, out of 37 total.