Many species of ants nest in the fallen nuts of trees. Fallen nuts provide ready-made and protected ant nesting sites. Nuts suitable for ant colonization must have an entrance, such as a crack or holes made by seed predators. Booher et al. (2017) estimates nuts of over 30 species of southeastern US trees including hickories, pecans, chestnuts, walnuts, and oaks provide nesting sites for ants. 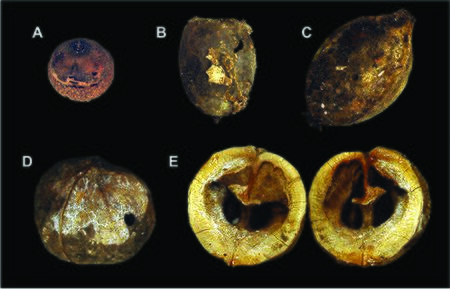 Many ants observed inhabiting nuts by Booher et al. (2017) might only rarely use nut cavities or do so for brief periods. Soil nesting species such as Solenopsis invicta were common where they occur in sampled sites, but they rarely occupied nuts. However, nuts may be a vital resource for the most common or site abundant ants that utilize cavities for nesting resources. We found that numerous queens of larger species that occupied nuts had few workers, suggesting these queens are likely using nuts for founding colonies, but quickly relocating as their colonies outgrew the limited space (e.g. Camponotus chromaiodes, Camponotus subbarbatus and Crematogaster lineolata). The most common species in the Booher et al. (2017) study, Nylanderia faisonensis, likely uses available nuts to house only portions of its colony at any given time. In most nuts containing this species, larvae and workers were found under the nut and in the surrounding leaf litter. In contrast, a few species were cavity-dwelling specialists with colonies completely contained within nuts (e.g. Temnothorax curvispinosus and Strumigenys rostrata). Several rare or uncommonly collected species were abundant at some sites including Nylanderia trageri, Vollenhovia emeryi, Temnothorax tuscaloosae, as well as other infrequently collected species that occur in low abundance and are likely to make nests in sites other than available nuts.