A member of the feae species group. The dentition of the mandible is unique among Afrotropical species. The number of thickened spiniform setae on the anterior surface of the metatibia varies from 5 to 7, but 6 appears to be the number most commonly encountered, all located on about the apical third of the length of the metatibia. C. decessor is easily separated from the much larger raptor by the characters noted in the key. (Bolton and Fisher 2008)

With characters of the genus and the feae group. Masticatory margin of mandible with 5 low-triangular blunted teeth separated by feebly concave diastemata that are much longer than the teeth are high. Margins of diastemata are unarmed or have reduced denticles or crenulation between the main teeth. Mandibles smooth with scattered small punctures. Head capsule slightly broader than long in full-face view. Dorsum of head with scattered punctures on smooth cuticle, the punctures denser on the sides of the head, especially anteriorly, and also with weak striation or punctate-striation within the antennal fossae. Pronotum more sharply marginate anteriorly, more bluntly laterally. Pronotal dorsum a flat to shallowly convex plateau behind the margination. Mesonotum weakly marginate behind the promesonotal suture. In profile the sloping face of the propodeum behind the mesonotum forms a long, deep concavity and the posterior propodeum is raised into a distinct tumulus. Metatibia with a few darkly coloured spiniform setae near the apex of the dorsum, and with similar but more numerous setae on the apical third of the anterior surface. Orifice of propodeal spiracle higher than wide but elliptical, not slit-shaped. Petiole node in dorsal view broader than long. Subpetiolar process short-spiniform. Petiolar spiracle on the peduncle, at base of anterior face of node. Pronotal dorsum, and anterior mesonotum, with widely scattered broad, shallow punctures that may be almost effaced. Pronotum also with vestiges of some very weak oblique costulae. Colour glossy brownish yellow to light brown, the head and mandibles darkest, the gaster lightest in shade. 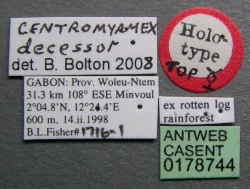