A member of the feae species group. Resembling Centromyrmex longiventris but larger and with a much more shallowly sloped anterior propodeum.

With characters of the genus and the feae group. Head capsule in full-face view appears about as long as broad, or slightly longer than broad, CI 98–101 in material examined. Mandibles smooth with scattered minute punctures. Masticatory margin of mandible weakly crenulate. Basal angle of mandible rounded, without a differentiated basal tooth. Dorsum of head with scattered punctures on smooth cuticle; the punctures on sides of head denser than on dorsum, and also with weak striation within the antennal fossae and on the sides, especially anteriorly. Metatibia with only normal setae dorsally but its anterior surface, at the apex and approximately opposite the pectinate spur, with two much stouter spiniform seta with bases close together. With mesosoma in profile the dorsal outline of the propodeum slopes only shallowly downward from the mesonotum; the more or less flat mesonotum passes into the sloping propodeum through a smooth, shallow curve. Petiole node in dorsal view broader than long. Pronotal dorsum with distinct broad, shallow foveolate punctures, the spaces between them with weakly rugulose superficial sculpture. Anterior mesonotum also with a few widely scattered broad, shallow punctures, but these are more sparse and less distinct than on the pronotum. Colour a light brownish yellow. 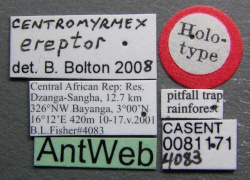