A member of the feae species group. Closely resembling Centromyrmex praedator but smaller and with different mandibular morphology. The two collection localities are very far apart and probably have very different ecologies, but there is no doubt that only a single species is represented.(Bolton and Fisher 2008)

Males of this species have not been collected.

With characters of the genus and the feae group. Head capsule in full-face view longer than broad, the sides extremely shallowly convex, almost straight and feebly converging anteriorly. Mandibles smooth with scattered small punctures. Masticatory margin of mandible with about 10 very small, inconspicuous low, broad teeth, the basal tooth discernible. Proximal of the basal tooth the basal margin is shallowly concave and almost as long as the masticatory margin. Dorsum of head with scattered punctures on smooth cuticle; on sides of head the punctures no denser than on dorsum; there are also some vestigial remnants of punctulate to striolate sculpture within the antennal fossae and anteriorly on the sides. Anterior margination of pronotum blunt, not a sharply defined rim; sides of pronotum not marginate. Dorsal surface of metatibia with 3–4 spiniform setae near the apex, without others located more proximally on the dorsum. Anterior surface of metatibia with 4–5 spiniform setae, all located near the apex. Petiole node in dorsal view longer than broad, the node narrow anteriorly and becoming broader posteriorly. Pronotal dorsum with coarse shallow punctures and low, transversely arched, shallow broad rugulae. Mesonotal dorsum mostly smooth, with a few widely scattered small punctures. Colour yellow to light brownish yellow. 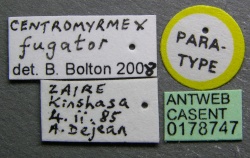