The type material was collected from a Miombo woodland.

A member of the feae species group. This is the largest Afrotropical member of the genus and its mesosoma the most darkly coloured outside the bequaerti group. Its dimensions, and the characters noted in the key, make raptor easily recognisable. (Bolton and Fisher 2008)

With characters of the genus and the feae group. Masticatory margin of mandible serially dentate, with 11–12 bluntly triangular low teeth that are all about the same size; distal one-fifth of masticatory margin edentate. Mandibles heavily constructed and large, smooth with scattered small punctures. Head capsule very obviously broader than long in full-face view (range of CI 119–123). Dorsum of head with scattered punctures and with striation around the antennal fossae and on the anterior halves of the sides. Anterodorsal margination of pronotum strongly developed; margination extends around the sides almost to the posterior margin of the sclerite. Pronotal dorsum a flat plateau behind the margination. Mesonotum sharply marginate anteriorly, the margination extends along the sides above the mesopleuron. Sloping anterior portion of propodeum forms a shallow concavity basally, the posterior portion of the propodeum is slightly raised and broadly rounded behind it. Metatibia with darkly coloured spiniform setae on the apical third of the anterior surface, and with similar setae on the apical third of the dorsal surface. Orifice of propodeal spiracle much higher than wide, almost slit-shaped. Petiole node in dorsal view broader than long. Subpetiolar process short, acutely triangular. Petiolar spiracle near mid-height of anterior face of node. Prora extremely feeble, represented only by a pair of short, very low cuticular ridges on the anterior face of the first gastral sternite, on each side below the helcium; the prora hardly discernible in profile. Pronotal dorsum, and anterior mesonotum, with widely scattered broad, shallow punctures upon a weakly shagreenate surface. The mesonotum also shows weak traces of longitudinal sculpture within the marginate area. Colour predominantly mottled dull brownish red, most of dorsal mesosoma and parts of sides infuscated to blackish. Gaster more uniformly coloured and slightly lighter. 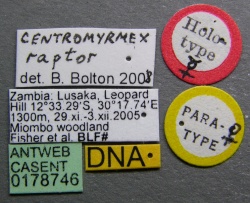