Nothing is known about the biology of Centromyrmex secutor.

A member of the bequaerti species group. This species is closely related to Centromyrmex bequaerti and shows the same polymorphic variations in the worker, but the two species differ consistently in the characters listed above in all worker sizes. As in bequaerti the petiole tergite of secutor in profile is distinctly higher than long in large workers, and very obviously longer than high in smaller workers (Bolton & Fisher, 2008c).

With characters of the genus and the bequaerti group; answering the description of Centromyrmex bequaerti in all except the following characters:

Bulla of metapleural gland is hypertrophied and extends anterodorsally to the base of the propodeal spiracle, which it just fails to touch (see comments under paratypes).

Protibia ventrally lacks a stout spiniform seta that is similar to those on the mesotibia; at most there is a simple slender seta located close to the apex on its outer surface, anterior to and opposite the large spur.

Pubescence is present on declivity of propodeum, especially near its base; the pubescence is more obvious in smaller than in larger workers.

Dorsum of the mandible with a flattened area just distal of the basal groove and the flattened area has a distinctly crowded patch of minute punctures.

The mandible has 5 teeth in larger workers (including the holotype) but only 4 in the smallest workers. It is not certain that the largest worker morph has been found, so larger workers may have more than 5 teeth. In most paratypes the bulla of the metapleural gland reaches the base of the propodeal spiracle. 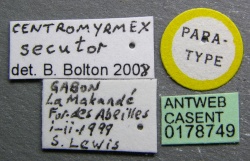