A member of the feae species group. This species and Centromyrmex angolensis are the most widely distributed and most commonly encountered species of the feae group in Africa. Superficially the two look very similar, but angolensis always has a longer, narrower head and only ever has a single stout spiniform seta at the apex of the anterior surface of the metatibia, about opposite the pectinate spur. In addition, the basal mandibular tooth in angolensis is generally absent, sometimes vestigially present, but there is never the basal tooth + diastema arrangement that is characteristic of sellaris. Care should be taken with this character because of variation in development in sellaris but it is usually a good indicator of the species. (Bolton and Fisher 2008) 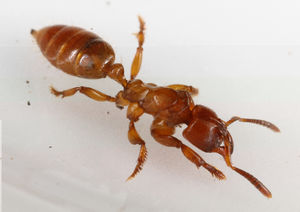 With characters of the genus and the feae group. Head capsule in full-face view always appears obviously broader than long, CI 108 or usually more. Mandibles smooth with scattered small punctures. Masticatory margin of mandible with 7–10 small, low blunt teeth that are usually broadly low-triangular but are often reduced to mere crenulations when worn. Basal tooth at basal angle of mandible and usually obvious, only rarely reduced and insignificant. Distal of the basal tooth there is usually a diastema before the next tooth on one or both of the mandibles, but sometimes this is not apparent as a denticle may be present within the diastema on one, or less often both, of the mandibles. Dorsum and sides of head with scattered punctures on smooth cuticle, and also with weak striation within the antennal fossae and on the sides, especially anteriorly. Extent of the striate component is variable. Metatibia with only normal setae dorsally but its anterior surface, at the apex and approximately opposite the pectinate spur, with 2 (3 in a single specimen) much stouter and usually more darkly coloured spiniform setae. Petiole node in dorsal view broader than long. Pronotal dorsum, and anterior mesonotum, with widely scattered broad, shallow punctures that may be almost effaced. Pronotum dorsally also with variable weak oblique or arched faint disorganised sculpture. Colour yellow to light brown. 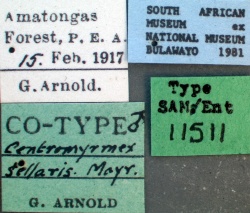 1 The unique holotype of sellaris was discovered by Dr Hege Vårdal in the NHRS collection, still preserved in alcohol after 117 years. The specimen was accompanied by three labels, two of which merely stated “Camerun” and “Sjöstedt” respectively. A larger and more informative label carried the information “Riksmuseets Entomologiska Afdelning. Centromyrmex sellaris Mayr n. sp. Typ. Kamerun, 1891. Colleg. Y. Sjöstedt”. The holotype has now been mounted upon a standard card point.

2 Although the holotype of congolensis appears to have been lost, it is possible that it may still be present but unrecognised in Weber’s material, either at AMNH or MCZC. Fortunately, the original description and figures are sufficient to allow identification of the taxon. For these reasons, and because the name is a junior synonym, a neotype has not been designated.

Bolton and Fisher (2008) - The species referred to as C. sellaris in Lévieux (1976, 1983) is correctly identified, as indicated by voucher specimens deposited in MCZC.