One of a number of Cephalotes fossil species that are known from Dominican Amber.

A member of the coffeae clade differing from its sister species, Cephalotes dieteri, by the sparser foveolation of the integument and by the CI ≥ 120.0 instead of < 114.

Mesosoma. Scapular angles visible in dorsal view. Anterior pronotal border gently convex. Pronotal sides with a broad, long, continuous lamella. Promesonotal suture superficially marked in some specimens only. Sides of the mesonotum with a pair of round teeth. Propodeum with differentiate basal and declivous faces; sides of the basal face angulate anteriorly and posteriorly; declivous face of the propodeum converging posteriorly, sometimes a minute denticle in the middle of the sides of the declivous face.

Petiole. Anterior face truncate, posterior face flat. Petiolar sides with a pair of obtuse or pointed teeth medially. Postpetiolar node weakly concave in the middle; anterior half of the postpetiolar sides with a pair of obtuse to pointed teeth arising from the anterior border of the postpetiole and with the base slightly directed forwards.

Gaster sub-oval, with a pair of anterolateral, semitransparent lamellae reaching the stigma posteriorly.

Colour. Frontal carinae, vertexal angles and gastral lamellae ferrugineous to brown and semitransparent. The transparency, of course, can not be observed in the specimens covered by a gaseous layer. At least in one specimen (MCZC-24) a darker spot in the middle of the first gastral tergite is well visible. 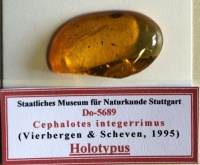