Cephalotes specularis has been shown to engage in a new form of resource-based social parasitism of the host ant Crematogaster ampla. This involves both mimicry of the host and eavesdropping on their pheromone trials (Powell et al. 2014). 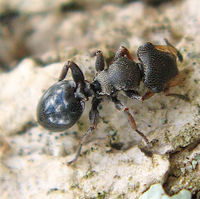 There is intraspecific variation is size of both worker castes and queens, as revealed in the ranges of measurements. The yellow pronotal and gasteral spots of major workers and gynes are often absent in the smallest “soldiers” and become more pronounced in the largest ones. Caste intermediates, with blended minor and major worker traits, are moderately common.

Generally, the collection of full colonies of Cephalotes species in the reproductive period of the year leads to the finding of all castes and sexes. The colony from which the types were described was a reproductive colony that had not yet released its sexuals. In addition to this colony, two other colonies were collected from the same population. Although all three of these colonies contained alate gynes, none contained males. De Andrade & Baroni-Urbani (1999) already commented about the scarcity of males in the Cephalotes species of the fiebrigi and bruchi groups; males are known for only four out of the combined total of 12 species. Populations of the species in this group may exhibit split sex ratios (individual colonies specializing in male or female production; Kümmerli and Keller, 2009) as recorded for other Cephalotes species (S. Powell unpubl. data). 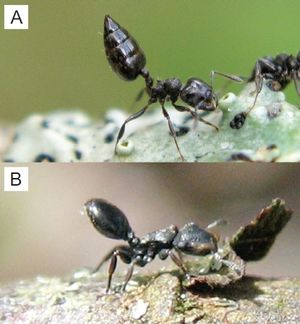 Cephalotes specularis has been shown to engage in a new form of resource-based social parasitism of the host ant Crematogaster ampla, which involves both mimicry of the host and eavesdropping on their pheromone trials (Powell et al., 2014). Discovery of additional C. specularis populations will therefore be of great value in examining the nature of this parasitic relationship across the range of both host and parasite.

Cephalotes specularis minor workers assume a peculiar posture, raising their gaster to almost a vertical position when visiting Crematogaster ampla trails. Minor workers of Cephalotes umbraculatus (umbraculatus clade of de Andrade & Baroni Urbani, 1999) and Cephalotes biguttatus (multipinosus clade, same reference) are able to raise their gasters to an extraordinary degree (up to 112o and 124o respectively) in a defensive posture while secreting clear, volatile fluids from the apex of the gaster that makes them distasteful to predators (Coyle, 1966). This extreme raise is achieved because of the marked inclination of the declivous face of the propodeum and the low, flat dorsal surface of the petiole, which lacks a truncate anterior face in both species. In C. specularis the petiole has a truncate, perpendicular anterior face in lateral view and the gaster is raised up to 70o in relation to the horizontal plane by virtue of the upward flexing of the petiole-postpetiole and postpetiole-gaster joints.

Powell et al. (2018) discovered C. specularis is a visual Batesian-Wallacian mimic of Crematogaster ampla. By looking like its host species, workers are able to move unharassed along foraging trails of the ecologically dominant C. ampla. Cephalotes specularis are able to steal food (kleptoparasitism) from their host, both by focusing on their foraging trails to find food (using pheromone-based interceptive eavesdropping) and by feeding so as to not interact with its host at actively exploited food resources. Crematogaster ampla typically vigorously defend their territory by aggressively attacking any non-nestmate ants they encounter. Cephalotes specularis colonies (n=36) were only found within C. ampla territories. Three collected colonies had 235, 288 and 676 individuals (minor and major workers, a single queen) and were found in from 6 – 11 nests. Reproductive brood were found in the smallest and largest colonies.

Penick et al. (2012) observed that workers of several myrmicine genera (including Cephalotes) hang fourth-instar larvae from the walls and ceiling of their nests. This behavior was dependent on the presence of specialized anchor-tipped hairs that occur on the dorsal surface of these larvae, as observed for C. specularis. When larvae received ‘‘haircuts,’’ they were no longer able to adhere to the nest walls. The occurrence of anchor tipped larval hairs in numerous myrmicine genera suggests that larval hanging behavior is common and widespread in this group.

Males have yet to be collected.

Body entirely lightly reticulate-punctate and weakly shiny, except for the gaster which is weakly reticulate and strongly shiny. Mandibles strongly punctate; dorsum of head and mesosoma foveolate, the head foveae tightly accommodate the canaliculated hairs and are more impressed near the vertexal margin and on the pronotal dorsum; external surfaces of femora and tibiae and dorsum of petiole and postpetiole weakly and irregularly foveolate; lateral surfaces of mesosoma with short longitudinal subparallel rugosities; anterior third of first gastral tergite with a few short longitudinal rugosities, originating from the postpetiole insertion.

Pilosity cream-colored and composed by four types of hairs: (1) canaliculated, truncate, thick and appressed, generally originating from each fovea; similar hairs may be present in some parts of body without an associated foveae; (2) clavate and suberect on the mandibles, anterior margin of clypeus, borders of frontal carinae, apex of leg segments, and on the posterior border of gastral segments; (3) long, pointed and subdecumbent on external margins and ventral surface of mandibles, antennal funiculi, surface of abdominal terga 4–7 and on sterna 3–7; (4) minute and appressed, sparsely distributed on the dorsum of the first gastral tergite.

Head as broad as long, anterolateral surfaces of frons and frontal lobes depressed. Mandibles with a conspicuous longitudinal lateral angle; anterior margin of clypeus slightly concave and simple, devoid of projections; external margins of frontal carinae (lateral margins of frontal lobes) weakly crenulate; frontal carinae minimally concave in front of the eyes and almost straight over the eyes; vertexal angles truncate, with an obtuse projection near the vertexal margin in full-face view; vertexal margin without projections and narrowly concave medially. Eyes situated behind and slightly above the antennal scrobes.

Mesosoma convex in lateral view, with a continuous dorsal profile. In dorsal view, anterior margin of pronotum evenly rounded; pronotum dorsum with two to three lateral pairs of irregular teeth; the first pair comparatively longer and acute and the following ones blunt to truncate. Promesonotal suture visible but shallowly impressed. Mesonotum with a pair of lateral irregular projections. Metanotal suture conspicuous in dorsal view but only weakly impressed. Propodeum with dorsal and declivous faces continuous, and with the lateral margins converging backwards towards the petiolar insertion; in dorsal view, lateral margins of propodeum with two pairs of lateral teeth, the first short and blunt and the second larger and acute; declivous face of propodeum with a single pair of short acute lateral teeth, better seen in lateral view. Mid and hind femora not angulate dorsally; mid and hind basitarsi anteroposteriorly flattened and with subparallel dorsal and ventral faces.

Gaster suboval, with a pair of well-developed thick anterolateral lobes, not extending posteriorly in the form of lateral lamellae.

Dorsum of cephalic disc strongly reticulate-rugose; rest of body superficially reticulate-punctate and weakly shiny. Dorsum of head and mesosoma foveolate, the foveae deeper and contiguous on the dorsum pronotum and mesonotum, slightly sparser and shallower on the dorsal face of propodeum, and only superficial on the ventral surface of head, external surfaces of femora and tibiae and dorsum of petiole and postpetiole; lateral surfaces of mesosoma with thin and short longitudinal subparallel rugosities; anterior third of first gastral tergite with a few short longitudinal rugosities originating near the postpetiole insertion, in a fan-like fashion.

Body with four types of hairs: (1) thick and appressed, generally originating from each fovea, somewhat shorter and thinner on the body parts without foveae; (2) strongly clavate and erect on the mandibles, anterior margin of clypeus, dorsal surface of cephalic disc (where they are particularly dark yellow), apex of tibiae, and on the posterior border of gastral segments; (3) long, pointed and suberect on external margins and ventral surface of mandibles, antennal funiculi, and ventral surface of gaster; (4) minute and appressed, sparsely distributed on the dorsum of the first gastral tergite.

Petiole and postpetiole as in the conspecific worker, but with less developed lateral expansions.

Gaster with the anterolateral lobes protruding anteriorly, but without the membranaceous borders seen in the minor workers.

Yellow spots on the gaster occupying a relatively broader area. Foveae sparser over mesosoma and petiole. Pilosity slightly sparser than in the major worker, especially on the dorsum of mesosoma and gaster.

Head slightly longer than broad. Vertexal lobes shorter and less pronounced. Posterior portion of cephalic dorsum with a single median ocellus. In dorsal view, pronotum anteroposteriorly narrower than in the major worker and with the lateral projections reduced to small denticles; scutum large and subtriangular, with the anterior margin strongly rounded; notauli absent; parapsidial lines feebly visible and parallel; transcutal sulcus deeply impressed, but not reaching the lateral margins of mesosoma in dorsal view; scutoscutellar sulcus arched and formed by short and transverse subrectangular foveae; scutellum well-delimited and broad, at the same level as the scutum in lateral view; dorsal face of propodeum convex and meeting the declivous face in a pair of large short, blunt, and acute teeth.

Wing venation developed, but lacking crossvein 2rs-m, rendering submarginal cell 2 open. Forewing with a strongly pigmented stigma; anal vein spectral for most of its length, not attaining the cubitus (Cu) vein; media (M) and cubitus (Cu) extending distally beyond stigma as nebulous veins, not reaching the distal border of wing. Marginal cell closed; free R (at apex of marginal cell) long and distant from anterior wing margin; 1rs-m+M abscissa of M arising from Rs+M more than half way between 1m-cu and 2r-rs. Hind wing with R+Rs mostly tubular until the junction with radius (R); M+Cu complete until the junction with radial sector and cubitus (Cu), the latter extending as spectral veins for most of their length and failing to reach the distal border of the wing; around eight submedian hamuli present.

(late instar) Length through spiracles: 4.2 mm. Profile pheidoloid. Segmentation more distinct near the lateral area of the body on the six first gastral segments. No leg or wing vestiges observed under SEM. Prothorax with a ventrolateral boss at each side. No other protuberances present. Anus subventral without lip. Spiracles not visible under SEM.

Integument spinulose, the spinules minute and in short to long subtransverse rows (more common or concentrated in different regions). Body hairs: minute (ca. 10 microns), dispersed and common throughout the body, longer (ca. 40 microns) hairs less common, also dispersed throughout the body. Six pairs of parallel, very approximate, flexuous, very long (200 microns) anchor tipped hairs on AI to AVI along the larva dorsal line; in AI and AII there is a single anchor-tipped hair laterally at each side of the dorsal pair.

The specific epithet refers to the reflective property of the minor worker gaster. From Latin “speculum” = mirror.