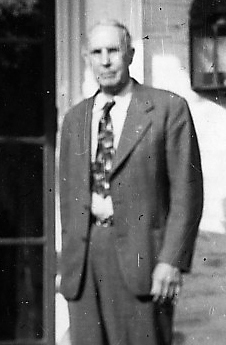 Born 10-20-1880, in Peebles, Ohio, Died December, 1964, in San Mateo, California James parents were farmers in Peebles, Ohio, and James was the only child to become educated beyond basic schooling. James was educated at Park College, Mo., where he met Ethel Robinson, from Great Bear, Minnesota, whose relatives helped found Park College. James served as instructor at Tufts College in Boston, Mass. He received his Doctor of Science degree from Harvard, and served in the Dept. of Public Parks for the city of Boston for a time. James and Ethel, with their first child, Katherine, and son Jim, went in 1916 to Dumagete, on the island of Negros Oriental, Philippine Islands. Their third son was born in Dumagete. James served for 30 years as Professor at Silliman Institute, (becoming Silliman University during his tenure.) After the bombing of Pearl Harbour, in 1941, James and Ethel, rather than surrender to the Japanese, fled into the hills behind Dumagete and lived there for two years, moving further and further into the jungle to escape detection. James hid some of his ant collections by burying them, and when he returned to Dumagete after the war, the collections were dug up and miraculously survived. Unfortunately James and Ethel were discovered eventually by the Japanese, and were taken as prisoners, spending 18 months in internment in Santo Thomas, Manila. After liberation in 1945, they returned to the United States to recuperate. James, a tall man of over 6 ft., weighed only 118 lbs. during confinement. They returned to Dumagete, where James and Ethel spent their last working years helping to rebuild the education system, to which they were very dedicated during their life in the Philippines. They established a substantial scholarship fund at Silliman University to help less fortunate young people obtain an education.

July 29, 1942, while Dr. Chapman was in the Horns of Negros hiding from the Japanese occupation troops; see his account of this remarkable adventure in the book Escape to the Hills, by James and Ethel Chapman; published by the Jaques Cattell Press, Lancaster, Pennsylvania

In the audience was Ms Kate Turner, great granddaughter of Silliman pioneers James and Ethel Chapman. Kate spent one week in Dumaguete getting to know more about her great grandparents’ work here and about SU. On August 9, Silliman University paid tribute to Dr. Angel C. Alcala who has placed the University on the international map with achievements in environmental science. Alcala was conferred the highest honor for an educator, the title of Professor Emeritus in Biology. In his speech he acknowledged a number of professors who played a major influence in his career, which included the University’s Father of Science Research, Dr. James W. Chapman, and Dr. Dioscoro Rabor.

1953 The James W. Chapman Research Foundation grants funding for the first issue of the Silliman Journal.