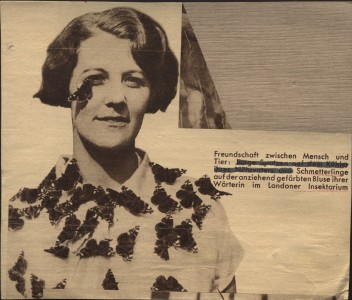 Cheesman was unable to train for a career as a veterinary surgeon due to restrictions on women's education. Instead, she studied entomology, and was the first woman to be hired as a curator at Regent's Park Zoo, in London.

In 1924 she was invited to join a zoological expedition to the Marquesas and Galapagos Islands. She spent approximately twelve years on similar expeditions, travelling to New Guinea, the New Hebrides and other islands in the Pacific Ocean.

Evelyn assisted at the Natural History Museum, London for many years as a volunteer. She was awarded an OBE for her contribution to entomology. At least one species of insect is named after her: the Costomedes cheesmanae.

She was the author of many books and scientific articles on entomology and her travels.

Miss Cheesman gives a number of observations on the habits of this "fire ant," which she found to be abundant on Tahiti and Raiatea, Society Islands, and at Fakarava in the Tuamotus.

L. E. Cheesman and W. C. Crawley have published a much more extensive account 45 of the ant fauna of both the Marquesas and Society Islands, based on material collected by Cheesman in 1925. Their list comprises 25 different forms.

While the expedition was in Tahiti, Cheesman received a large sum of money from her brother, which allowed her to resign her government position. She wanted to choose her own sites of exploration and to remain at each as long as she liked. An old sea captain on the island allowed Cheesman to live in a one-room hut he owned and gave her a few supplies. From her home base in Tahiti she explored other islands in French Polynesia, including Bora Bora. She stayed with Europeans she had met or native villagers during these excursions. She ate what she could find, and when there was no trail to where she wanted to go, she cleared one. After several months in Tahiti, Cheesman returned to England with a collection of five hundred insect specimens, which she donated to the British Museum of Natural History.