The two type workers, the only known specimens of the genus, were collected from rainforest leaf litter. 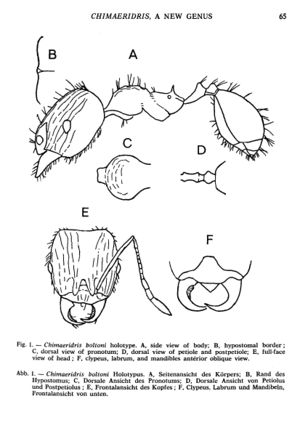 Mandibles unique, as described in the generic diagnosis and shown in Figure IE. The basal mandibular tooth broader and more bluntly tipped than in Chimaeridris burckhardti. Dorsal surface of clypeus shallowly convex (in holotype the center of the surface is slightly depressed); the median half of its anterior border straight (paratype) or very feebly concave (holotype), its dorsal surface lined with several irregularly positioned longitudinal rugae or carinulae as shown in figure. Frontal triangle well demarcated, flat, and approximately level with the immediately surrounding surface of the head. Frontal lobes narrow and raised at only a slight angle (20°) above the level of the frontal area. The frontal carinae diverge slightly and reach mid-eye level. Hypostomal border bears one blunt tooth on each side level with the mandibular insertion; the apex of each tooth forms an angle of slightly less than 90 degrees. Antennal scape circular to ovoid in cross-section, not flattened. Antennal club 3-segmented, slightly longer than the remainder of the funiculus. Lateral body outline as depicted in figure. Seen from directly above, the pronotal border forms a nearly perfect circle. However, when the pronotum is viewed obliquely, that is from above with the body tilted 45 degrees along its longitudinal axis, a pair of low cornicles is evident, with one cornicle each situated near the lateral edge of the pronotal dorsum. Also seen from above, both the petiolar and postpetiolar nodes are relatively narrow, with the postpetiolar node being slightly less than 2X as wide as the petiolar node; neither possesses cornicles or other lateral projections.

Head and mandibles medium reddish brown. Alitrunk and waist a slightly contrasting light reddish brown; appendages (other than mandibles) and gaster brownish yellow. Mandibles smooth and shining; clypeus weakly shagreened and feebly shining. Frontal lobes, frons, and vertex densely and longitudinally rugulose and densely foveolate in the interspaces. Entire remainder of head densely but shallowly rugoreticulate, with orientation of the rugae predominantly longitudinal (especially so just mesad of the eye); interspaces densely foveolate, with the foveolae prominent enough to render the rugoreticulum difficult to see on some portions of the head surface. Dorsal surface of the pronotum and mesonotum bear a more elevated and obvious rugoreticulum, again with the inters paces strongly foveolate. Remainder of alitrunk densely foveolate, with no rugae. Waist foveolate; foveolae shallower on postpetiole than on petiole and alitrunk. Gaster shagreened (Le. with extremely fine roughening of the surface) and subopaque. Almost all of body and appendages moderately pilose.

This species is named for Barry Bolton in recognition of his wide-ranging and important studies on the Old World tropical ant fauna.