A widespread member of a group of Crematogaster species associated with Macaranga plants in Sumatra, Borneo, and Peninsula Malaysia. 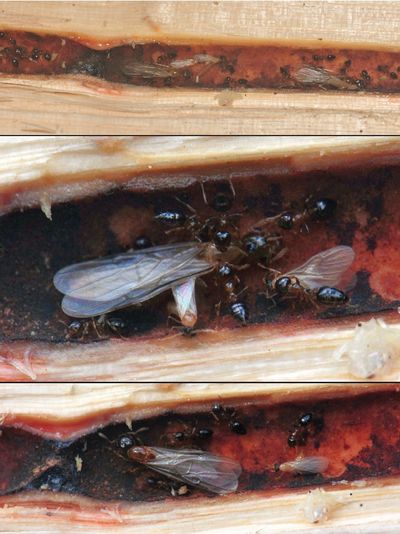 Queens colonize seedlings as well as the tips of mature hosts that have been abandoned due to the loss of the original colony. On Peninsula Malaysia secondarily polygynous colonies that contained several queens have been found locally in the Gombak area.

Fiala et al. (2017) studied mating flights and reproductive dynamics in C. captiosa living in Macaranga bancana. The authors have acquired a good knowledge of Crematogaster-Macaranga ant-plants over decades: After localization of a host-plant, single queens enter a sapling by chewing an entrance hole into an internode. The hole is sealed from the inside and colony founding is claustral. The first workers open up the internodes and start foraging for food bodies produced by the plant as well as for honeydew from specific coccids (Fiala & Maschwitz 1990; Heckroth et al. 1998, Ueda et al. 2008). Whereas several colonies may be founded simultaneously in different internodes, only a single monogynous colony finally inhabits each host (Fiala & Maschwitz 1990; Feldhaar et al. 2003). The only fertile queen of the colony is physogastric and always situated in a low region of the stem, so all female alates found elsewhere in the tree are newly produced. Alate production of C. captiosa (provisionally named Crematogaster msp. 4 in our earlier publications) begins in colonies containing 5000 or more workers (Feldhaar et al. 2003). Crematogaster captiosa is a very widespread species occurring in Peninsula Malaysia, southern Thailand, Sumatra, and Borneo.

Mating flights were observed at a field station near Kuala Lumpur (peninsular Malaysia), and sexual production monitored through nest censuses. Mating flights occur as swarming events and take place in the evening within the first few hours of darkness. Individual colonies released sexuals on numerous nights. One observed colony released sexuals for a few nights, then did not swarm for a few nights, then swarmed again for a few nights. No obvious weather events appeared to precipitate the flights. Some matings were observed to take place on the plant. These did not appear to be individuals, i.e., male and females, leaving the same nest entrances. Most alates flew from the plant after emerging and without mating on the plant. Males began flying first, then females become more numerous. It was estimated that less than 50 females flew from a colony during each swarming event.

Mating flights apparently occur throughout the year. Alates were continually produced, as noted by finding new sexuals in nests sampled by cutting open plants with ant colonies every month for a year. Newly colonized plant saplings were also readily found throughout the year, which is indicative of a recent swarming flights. Frequent swarming of some sexuals, as opposed to a large scale annual mating period, might be the best strategy for continually providing newly mated queens to colonize saplings that are emerging throughout the year in newly disturbed sites.

Colour light to reddish brown (large workers) with head and gaster being a slightly darker shade than the alitrunk. Workers monomorphic in size. Total body length of workers 2.3 to 3.3 mm. Head and gaster shiny with smooth surface, alitrunk slightly less shiny and faintly shagreened. All body parts bear appressed pubescent hairs. Long flexuous setae present on head, gaster and abdomen: on head especially in frons on gaster more on the posterior margins of tergites and sternites. Only few setae on alitrunk and one pair each on petiole and postpetiole.

Queens are large, 6.9 to 8.0 mm in total body length and uniformly light to medium brown in colour. Surface of head and gaster smooth and shiny, alitrunk slightly less shiny and faintly shagreened. All body parts bear appressed pubescent hairs. Long flexuous setae present on head gaster and abdomen: on head especially in frons, on gaster more on the posterior margins of tergites and sternites. A row of long erect setae pointing anterior are present on the clypeus. Mandibles relatively short, capable of closing tightly against the clypeus.

Compound eyes oval-shaped from lateral view and convex from dorsal view, with the margin of the compound eyes protruding from the sides of the head. Compound eyes large relative to head length spanning more than one third of HL (REL 0.38-0.48). Maximum diameter of compound eyes usually from 0.55 to 0.65 mm (mean EL: 0.6 mm). Maximum width of head including compound eyes usually at least 10% wider than HW (mean 13%). Ocelli relatively large in diameter. Diameter of median ocellus (OW) always larger than distance between lateral ocelli (OD1).

Mesoscutum convexly rounded anterodorsally. Mesoscutellum nearly in horizontal plane in lateral view. Propodeum flattened dorsally and then drops off at an angle of approximately 45° posterior of the propodeal spiracle. Mesoscutum long, stretching out over approximately half of the alitrunk in lateral view. In dorsal view, the posterior margin of the propodeum forms a straight line and the mesonotum broadly triangular. Propodeum not armed with spines.

Node of petiole and postpetiole in dorsal view rounded and approximately the same width (mean PI: 0.98), but variable (PI range: 0.93-1.10). In lateral view the petiole anterodorsally flattened and sloping downwards and slightly longer than the postpetiole. Postpetiole round in dorsal and lateral view without distinct nodes.

Feldhaar et al. (2016) - Holotype, 1 worker Sarawak (Borneo), Malaysia (Haviland) (Musee d'Histoire Naturelle Genève). [In addition 1 queen; however in the original description of Forel (1911) only 1 worker is mentioned but no queen; collection data given on the same label, examined.]