Little is known about the biology of this species.

The C. hova-complex has a wide distribution throughout the humid and transition forests of northern, central and southeastern Madagascar. It is generally absent from the western dry deciduous and spiny forests occupied by C. grevei, but present in isolated pockets of humid or transition forest remaining at a few locations in the west, such as in e.g. P.N. Zombitse or P.N. Isalo. From the very northern tip to the extreme south of the island these ants are a prominent element of the rainforest canopy fauna, inhabiting all altitude levels, with a highest record of 2000m in the Marojejy massif. (Blaimer 2010)

Blaimer (2010) - Within its distribution range, the Crematogaster hova-complex is the most abundant and dominant representative of the Malagasy Decacrema. Although these ants possess an arboreal lifestyle, they are nonetheless highly conspicuous on the forest floor when foraging for food and nesting material, and could hardly be missed in an inventory. Fisher et al. collected workers of these ants innumerable times from leaf litter and beating samples, as well as pitfall, yellow pan and malaise traps. Prevailing nesting behaviour of the C. hova-complex however is the construction of arboreal carton nests. I have found these nests in various heights in the canopy: from as low as 1.20 m, attached to vines or branches of young trees, to 20m or more high up in the crowns of canopy-level trees. The sizes of carton nests inhabited by workers, the reproductive queen and brood range from as small as 6 x 4cm in diameter to as large as 25 x 20 cm. Nests housing only workers are frequently encountered and can be smaller in size. It is unclear whether these queenless colonies represent satellite nests of larger nests that are hard to locate, or aggregations of workers whose colony underwent disturbances that resulted in the loss of their reproductive queen and brood. Polydomy in these carton-nesting colonies seems to be quite common, and two or more nests often can be found very close to each other on the same tree, or located on adjacent trees. Experimental or genetic studies would be needed to fully explore details of colony structure. In 17 carton nests out of a total of 30 dissected nests I found one dealate queen together with workers and brood, sometimes with alate queens and males as well. The remaining 13 nests contained only workers, sometimes together with brood. Carton nest colonies further housed staphylinid beetles (6 colonies), and in one case scale insects of an undetermined genus of the family Monophlebidae, possibly Gigantococcus (P.J. Gullan, pers. comm.).

There are some records in the CASC of C. hova-complex workers (in some cases with dealate queens) collected from dead twigs or branches, and in a single instance I have found workers with brood in a dead twig myself. It seems likely that colony founding within the species-complex takes place in dead twigs or branches and the construction of carton nests subsequently commences after a certain colony size is reached, i.e. when the colony can afford to send workers to forage for nest material rather than food. The ultimate domicile may always be the carton nest, since this can support much larger numbers of individuals and can be extended in size as the colony grows.

Blaimer (2010) found this species is actually a species complex:

I distinguish 5 morphotypes of workers within the C. hova-complex on the basis of sculpture, body size and propodeal spines. Designation of these morphotypes is somewhat arbitrary as they are not entirely distinct from each other, but have intermediate forms – and further intermediate forms of these ‘intermediates’ exist. They should therefore not be perceived as distinct units, but rather as samples from an overall gradient. For the purpose of distribution mapping some ambiguous assignments to morphotypes were therefore made. The following distinction however simplifies the description of morphological variation greatly, and allows for its analysis for possible geographic patterns. Moreover, this morphotype concept presents a starting hypothesis for a much needed study on the population genetic level of the C. hova-complex.

Morphotype 2 (mt2). Medium to large size (HW 0.92–1.19, WL 0.93–1.22). Head sculpture reticulate, reticulate-areolate to weakly areolate; propodeal spines medium size, at most as long as distance between their bases (SPI 0.22–0.26), in dorsal view only weakly diverging (<20º). Colour light brown to black, metasoma often lighter coloured in brown form, 4th abdominal segment or entire gaster sometimes of yellow coloration (may be due to parasitism rather than inherent pigmentation).

This morphotype is intermediate in regard to mt1 and mt4. 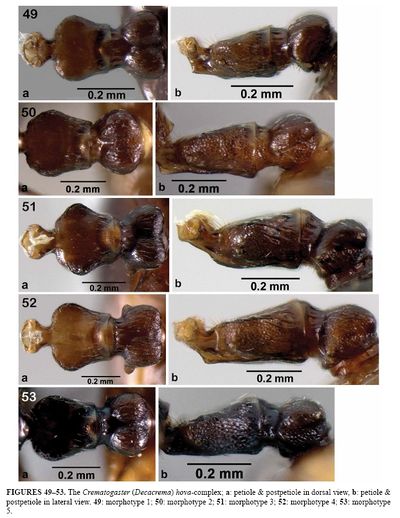 Morphotype 3 (mt3). Small to large size (HW 0.74–1.13, WL 0.78–1.19). Head sculpture from scattered aciculate to reticulate to costulate-areolate or areolate; propodeal spines large and robust, often “swollen” at base, at least as long or longer than distance between their bases (SPI 0.29–0.40), in dorsal view strongly diverging, ca. >30º from lateral margin of propodeum. Colour brown to black.

This morphotype conforms best with the C. ensifera type material.

This morphotype conforms closely to the C. schencki type material. Together with mt2 it is the most common morphotype of the hova-complex.

The C. hova-complex is named for the oldest available species name that belongs under the complex, Crematogaster hova Forel. The Malagasy word “hova” denotes the inhabitants of the region Imerina on the east coast of Madagascar, where the type locality of C. hova lies.