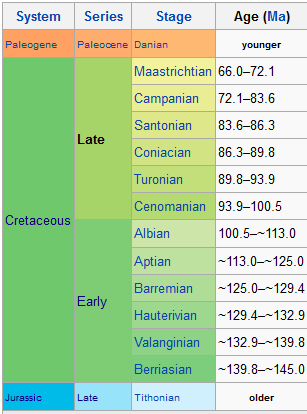 The Cretaceous is a geological period that lasted from about 145 to 66 million years ago (mya). It is the third and final period of the Mesozoic Era, as well as the longest.

The Cretaceous was a period with a relatively warm climate, resulting in high eustatic sea levels that created numerous shallow inland seas. These oceans and seas were populated with now-extinct marine reptiles, ammonites and rudists, while dinosaurs continued to dominate on land. During this time, new groups of mammals and birds, as well as ants and flowering plants, appeared.

Ant Genera Known from the Cretaceous

Ant Species Known from the Cretaceous