Unusual for the genus in its preference for arid habitats.

Mackay and Mackay (2002) - This species nests in the soil or under stones in creosote bush scrub. Nests consist of a few dozen workers and a single queen. Fungal gardens can be located a few centimeters under the soil surface in small chambers a few centimeters in diameter. Workers forage primarily at night or on moderately warm days in the spring and fall. They move slowly and feign death and are thus difficult to see. These ants are most commonly collected under stones or in pitfall traps. Males are attracted to lights.

C. wheeleri is more xerophilous than most species of the genus. According to Wheeler (1907: 765-8), whose field studies were made in the vicinity of Austin, it occurs only in arid regions. Nests were found principally on the higher and drier terraces of limestone hills, although a few nests were also discovered in the hard, pebbly soil of open wood at lower altitudes.

The hillside nests are invariably under large stones, which cover both horizontal and vertical galleries (the latter descending into the ground to a depth of 10-15 cm). One of the horizontal galleries communicates with the exterior at the edge of the stone. The entrance is sometimes marked by a small crater. The sessile fungus garden, having the size of pecan nut, is found at a particular widened portion of either the horizontal or the vertical galleries. The garden presents a flocculent appearance, and consists of small slivers of vegetable debris (probably entire sections of stems of herbaceous plants) bound together by the snow white mycelium. Skeletal parts of dead insects, principally fragments of coleopterous elytra, have been found inside the garden; they were probably added to the structure in order to give it consistency. The ants attach the refuse as a flat mass to the undersurface of the stone, or more rarely dump it outside the entrance.

The woodland nests were marked by craters of earth crumbs, around a small, circular opening of a vertical gallery, descending to appreciable depth into the soil. Wheeler was unable to unearth the fungus garden.

The colonies usually do not comprise more than a few dozen workers with a single queen. Their activity seems to be mainly nocturnal. Sexual forms appear in the nests ready for nuptial flight from early to late in June. As all other species of the present genus, the worker move slowly and "feign death" at the least disturbance. 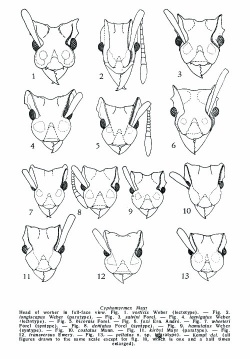 Pedicel (fig 25, 37). Petiolar node trapezoidal in dorsal view, broadest just behind the obliquely truncate anterior corners, its dorsum flattened, oblique; posterior corners with a raised, strong tooth; posterior border likewise raised and lamelliform, connecting the teeth from base to tip. Postpetiole decidedly broader than long, its dorsum with a shaIlow median impression between a pair of low, longitudinal welts, the extremities of which are tumuliform. Posterior border moderately and evenly rounded. Gaster anteriorly truncate; tergum I with a short antero-median impression, its sides submarginate.

Very similar to the worker. Pronotum with prominent inferior and superior teeth, the former acute, the latter larger and blunt. Mesonotum prominent, flattened, with a faint median furrow anteriorly and a pair of broader Mayrian furrows. Scutellum with very broadly and faintly excised posterior border separating a pair of broad, acute teeth. Epinotum with the base convex and only about half as long as the abrupt concave declivity; spines similar to those of the worker but somewhat stouter.

Sculpture and pilosity as in the worker.

Color a little darker in old specimens. Wings opaque, infuscated; the membranes and veins in the anterobasal portion of both fore and hind wings fulvous.

Head, without the mandibles and eyes, narrow, longer than broad, with straight posterior border. Mandibles like those of the worker but less distinctly denticulate. Frontal carinae with large, reflected lobes and strong, diverging posterior ridges reaching to the posterior corners where each terminates in a compressed, projecting tooth. Postorbital carinae absent. Antennae slender, scapes enlarged towards their tips which surpass the posterior corners of the head by about 1/3 of their length. Pronotum with indistinct inferior, but prominent and acute superior teeth. Mesonotum with distinct Mayrian furrows. Scutellum like that of the female, but with more deeply excised posterior border. Petiole and postpetiole like those of the worker and female. Gaster elliptical, convex above. Legs long and slender. Hind femora not angularly dilated below.

Pilosity very similar to that of the worker and female.

Ferruginous; upper surface of head and the thoracic depressions blackish; basal segment of gaster dark brown above. Mandibles, antennae, legs and tip of gaster yellowish. Wings like those of the female.

Kempf (1966) - Workers and a female collected by W. M. Wheeler in the environs of Austin, Texas, U.S.A.; three syntype or nidotype workers, received on exchange from the Museum of Comparative Zoology at Harvard College for my collection (WWK), were examined.