Diaphoromyrma sofiae, the only species in the genus, is known only from collections gathered from litter samples.

The combination of the following traits differentiate this taxon from any other in the subfamily Myrmicinae: antenna 9-segmented with a 2-segmented club, clypeus broad, clypeus with central apical hair, promesonotum trapezoidal, propodeal spiracles situated on lateral propodeal edges. The low position of the postpetiole and the sternal configuration of the first gastric segment are unique in Myrmicinae and apomorphic for the genus.

Known from the state of Bahia, Brazil.

The combination of traits in the diagnosis differentiates this thus far monotypic genus from any other myrmicine. The unique shape of the promesonotum, trapezoidal in dorsal view and with well defined angles at the sides; the comparatively high and narrow petiolar node, contrasting with the broader, low and round postpetiolar node, the low position of the insertion of the postpetiole on the anterior face of first gastral segment, and the dorsal extensions of abdominal sternite 4 are unique and represent potential apomorphies of Diaphoromyrma.

Usually in myrmicine ants the dorsal margin of the postpetiole is higher than the top of first gastral tergite, in lateral view. In Diaphoromyrma the joining of the postpetiole with the gaster is so ventral that the postpetiole in lateral view is very low relative to the upper margin of the gaster. The rounded and recurved anterolateral extensions of the fourth abdominal sternite, which curve up onto the dorsal surface of the segment and are visible in dorsal view, delimiting two round semicircular areas, are unique in Myrmicinae. Some cephalotines have differentiated anterolateral extensions on abdominal segment 4, but from the tergite, and not from the sternite (Ward, comm. per.).

There are rows of setae on the anterior clypeal margin, including a central seta. Although not shown on the Automontage view, the central seta is visible on the SEM picture.

As with some other myrmicine ant genera recently described (Tyrannomyrmex, Dolopomyrmex, Tropidomyrmex), Diaphoromyrma is difficult to relate to any of the tribal taxa defined by Bolton (2003). The central clypeal seta is characteristic of the Solenopsidini (sensu Bolton 1987), although they may not be homologous, but the clypeal configuration differentiates Diaphoromyrma from this group as defined in Bolton (2003:57). As pointed out by Bolton (1987 and 2003:57), Allomerus and Diplomorium are problematical genera in the Solenopsidini, as the posterior portion of the clypeus is relatively broad. However, Diaphoromyrma lacks any of the diagnostic attributes of both genera (antennal club segments constricted basally in Allomerus and postpetiole broadly attached to the gaster in Diplomorium; and also antennal club 3-segmented in both genera). The 2-segmented antennal club and the specialized first segment of the gaster suggest that Diaphoromyrma is not closely related to either of these genera.

The membership of Diaphoromyrma in Stenammini or Adelomyrmecini (the other tribes of the solenopsidine tribe group [Bolton 2003]) is unlikely. Diaphoromyrma lacks the specialized lamellate hairs on the ventral side of masticatory margin of adelomyrmecine mandibles (Fernández 2004) or the various traits listed in Bolton (2003:58) for stenammines, namely the clypeal configuration. Although Diaphoromyrma possess the clypeus broadly inserted between the frontal lobes, it lacks any of the traits defining the tribes Myrmicini, Lenomyrmecini, Pheidolini, Tetramoriini or Paratopulini. Diaphoromyrma should also be compared with the formicoxenine tribe group (Bolton 2003:65). The membership of the genus in the tribe Formicoxenini is complicated by several differences: the toruli are slightly exposed in Diaphoromyrma (partially visible in only a few taxa of Formicoxenini, Bolton 2003), the propodeal lobes are relatively reduced (present and usually rounded in Formicoxenini), the antenna is 9-segmented with 2-segmented club (antenna with 8 to 12 segments and with 3 or 4–segmented club in Formicoxenini, but never with this combination, Bolton 2003). This genus is also clearly not a member of the other myrmicine tribes as presented or proposed in Bolton (2003).

According to an ongoing ant phylogenetic study by Phil Ward´s research group in Davis, University of California, Diaphoromyrma is not closely related to Solenopsis group. These studies offer strong support for a Solenopsidini sensu stricto clade, which is quite distinct from Diaphoromyrma and other myrmicines (Ward, com. per.). Further collections and studies on gynes and males may throw some light on the phylogenetic affiliations of this new, enigmatic genus. 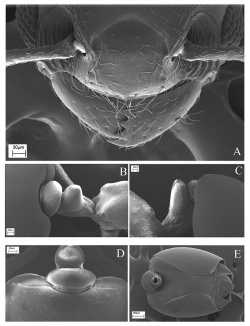 Row of hairs on the anterior clypeal margin, including median seta.

In dorsal view the promesonotum triangular, with sides well defined.

Propodeal spiracles conspicuous, situated on the dorsal edge of declivous face of propodeum, breaking the propodeal outline in lateral view.

Propodeal lobes small and rounded, not linked by a dorsal carina.

Petiolar node high in relation to the postpetiolar node, narrow (in dorsal view) in contrast with the broader, postpetiole node.

Postpetiole attached low on the gaster, so the top of the first gastral tergum at about the same level as the postpetiole.

Abdominal sternite 4 (first gastral) with a pair of rounded recurved anterolateral extensions which curve up on to the dorsal surface of the segment, and are visible in dorsal view on either side of the postpetiole.

Diaphoromyrma is a neologism forged from the Greek words διἀφορος (diaphoros), meaning different or remarkable, and μύρμηκος (myrmekos), ant. This name alludes to the several traits that differentiate this genus from any other Myrmicinae, especially those relative to the gaster.