A soil nesting species that appears to be most active in its foraging at night. One excavated nest was found to contain 120 workers. (Morgan 1993, as reported in Lenhart et al. 2013)

Lenhart et al. (2013) - Worker. This species can easily be recognized by the golden luster of its conspicuous long, flagellate hairs especially on the frons. In addition this species has the following combination of character states: pronotal corner rounded without tooth-like process (Fig. 1E), no gular striations, a reflective, smooth and shiny integument. All specimens have a petiole which bulges on the dorso-anterior edge except for those from the Rio Madeira and Rio Negro in Brazil.

Male. Distinguished from other Dinoponera by the following combination of character states: funiculus of antennae with short, thick decumbent setae; pygidial spine shorter than in Dinoponera gigantea and Dinoponera quadriceps but longer and narrower than in D. australis and D. snellingi, volsella with broad basal lobe covered in minute teeth.

Dinoponera longipes have been collected in eastern Perú in the departments of Loreto, Amazonas, Huánuco, San Martin and Pasco, as well as Ecuador in the province of Pastaza. In Colombia it has been recorded near the Peruvian border in the department of Amazonas. In Brazil, D. longipes has been found in Acre, Amazonas as far east as Manaus, as well as along the Rio Madeira in Rondônia (Lenhart, Dash & Mackay, 2013).

Randy Morgan (1993) reported findings from field studies and observations of a few artificial nests of D. longipes. He collected and observed foragers and nests during three visits (June 1992, and March and July 1993) to an Amazon research station in Peru. A few colonies were brought to the Cincinnati Zoo and Botanical Garden and kept in artificial nests.

Field Nests The field site in Peru was upland forest (in, or very close to, what is now part of the Act Field Station - Explorama Lodges, 3°14′57″S 72°54′32″W﻿ / ﻿3.24917°S 72.90889°W﻿ / -3.24917; -72.90889). Morgan found 22 nests along a ~800 m trail with a 25m elevational change. The distance between neighboring nests varied from 14 - 70m. Dinoponera longipes live in ground nests, typically in an area with sparse understory vegetation and shade from the forest canopy. Nests had slight to well-developed soil mounds that were positioned around the base of a variety of plants. The number of nest openings, 2-3 cm holes, varied with colony size (range from 1-30, averaging 11). The opening led into a slightly sloped tunnel attached to nest chamber located about 30 cm from the surface.

Nest chambers were round or oval and about 10-15 cm wide. They were slightly domed and roughly 3-4 cm high from floor to ceiling. Some chamber floors were lightly covered with a layer of what appeared to be bits of dry vegetation.

Colonies of two nests were excavated in the field to assess their composition. One contained around 120 females (all morphological workers, hence no distinct queen), 5 winged males, 57 cocooned pupae, six large larvae, over 30 small to medium-sized larvae, and 25 eggs. The relatively numerous nest surface openings of this colony and the presence of males suggested this represented a large, mature colony. The second nest has seven morphological worker females and 11 eggs. Freshly excavated soil around the entrance, the small size of the nest and ant numbers, and the absence of brood other than eggs suggests this was an incipient colony. 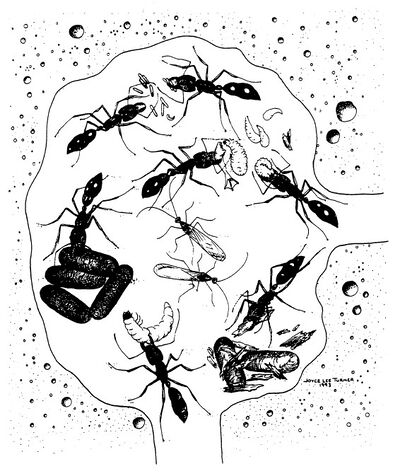 Captive Nest Observations Colonies appear to be highly mobile. When first released, individuals readily explore newly found nest openings and within minutes carry their brood inside. Eggs most often are held and moved in small clumps, while larvae and pupae are transported individually. Similarly, if nest chambers are opened or otherwise disrupted, the ants rapidly carry their brood to secure areas.

Observation nest chamber temperatures generally remained close to 24°C, but when one chamber was slowly warmed, the colony began to move out as the temperature approached 27°C.

Once settled in a nest, workers often partially cover and hide, or sometimes reduce or temporarily block, nest openings with mulch. This behavior may help camouflage nest openings or make them more defensible.

Fecal droplets are used to line nest chamber walls, and to a lesser degree, crevices and spaces outside the observation nest boxes. It seemed possible these contained chemical cues for forager orientation or nest recognition. The droplets are applied as a dark gray liquid but soon dry and blacken. This or a similar material slowly accumulates as an oily film on the underside of viewing glass (nest chamber ceilings), eventually interfering with nest observation and required cleaning.

Brood tended to be segregated by stage and size. Eggs are narrowly elongate (about 1 x 3 mm), and are grouped on chamber floors or held with the mandibles, either singly or in small clusters. The eggs readily adhere to one another, apparently facilitating their movement. Several observations suggest that small numbers of eggs normally are present in nests, even when developing larvae and pupae are not.

Hatchling larvae are tiny and coiled, while older larvae are platythyreoid (Wheeler & Wheeler, 1976), exhibiting long flexible necks. Larvae obviously feed while being held or carried between the females' mandibles; the larvae are characteristically positioned ventral side up such that they have easy access to the ants' brush-like mouthparts. Older larvae grouped on nest chamber floors also feed on items placed on or near them.

When fully grown and ready to pupate, larvae are lightly covered with mulch that provides a supporting framework for cocoon silk spinning. Cocoons are brown and oblong; those producing males generally appeared slightly smaller than those for females.

Two repeatedly observed behavioral interactions between nestmates are noteworthy. The first, called antennal drumming, is exhibited in the nest between meeting or facing ants. The antennae of one are drummed rapidly for about 1 second against its nestmate's head region; this often is followed by an immediate, reciprocating response.

The second, called biting and tucking, frequently involved newly eclosed females, and seems dominance related. One or several females bite and hold a nestmate's body, effectively immobilizing it, often for many minutes at a time. Usually legs and thorax are held, but sometimes it is the head or abdomen. Biting recipients typically tucked their heads and curled their abdomens underneath and forward in an apparent defensive or fetal-like position, and some ants assumed this posture even when not being bitten.

Females seem long lived and apparently can begin egg production after months of inactivity. In one nest, eleven or about 85% of the originally collected females (n=13) were alive 14 months later. Presumably these were relatively old when captured, since they initially behaved as nest defenders. After about six months in captivity, this group began egg production and routinely tended about a dozen eggs. Several hatchling larvae were observed at various times, but all failed to develop; one was observed shriveled and dead, and all disappeared after 1-2 days.

General Conclusions Dinoponera longipes have numerically small, queenless, and potentially highly mobile nest populations. The ants evidently prefer a fairly narrow temperature range, centered at about 24°C, for both foraging and nesting. Colony social organization seems to be governed, at least in part, by dominance interactions within the nest. Nests are generally large, spacious, and shallowly positioned, possibly to avoid flooding in the wet forest habitat. The ants seem to be highly adapted for primary forest habitat, especially since disturbed areas around the field lodge conspicuously lacked colonies. Given their extreme specialization and timid nature, D. longipes may be among the first species to disappear with significant human disturbance and primary forest habitat alteration.

The overall D. longipes nest site pattern suggests colonies are overdispersed, maintaining a minimum acceptable distance from neighboring coloniens. It would not be surprising to find that colonies maintain distinct foraging territories around their nests and defend these from conspecific colonies. The ants are well adapted to exploit a wide variety of small live prey or larger animal carcasses. One likely important food source is dead or dying animals raining down from the prolific rainforest canopy.

Lenhart et al. (2013) - Holotype worker PERÚ: Cumbase (Museo Civico di Storia Naturale, Genoa) [examined]. Unless otherwise noted the text for the remainder of this section is reported from the publication that includes the original description.

A description of the external morphology of the worker is given in Kempf (1971): “Antennal scape from slightly shorter to slightly longer than maximum head width (index: scape L/head W × 100 = 94–103). Pubescence on front of head (as well as on thorax and dorsum of gaster) golden brown, very dense and rather long. Gular face of head smooth and shining, without vestiges of striae antero-laterally. Antero-inferior corner of pronotum obtusely angulate, not dentate. Pronotal disc smooth and shining, but densely covered with piligerous punctulae; paired swellings from faint to distinct; integument not wrinkled. Tarsus I of hind leg decidedly longer than maximum length of head capsule. Petiole smooth and shining; shape resembling that of quadriceps…, dorsal surface faintly to distinctly slanted backwards; width-length proportion distinctly lower than 0.80: vertical sulcus on posterior surface present in specimens from Acre Territory, Brasil, absent in specimens seen from Perú. Terga I and II of gaster smooth and shining but densely covered with punctulae from which arises the long and dense pubescence that covers the entire segments. Stridulatory file on acrotergite of Tergum II of gaster very short but broadly triangular, not extending backwards beyond the anterior half of acrotergite.” 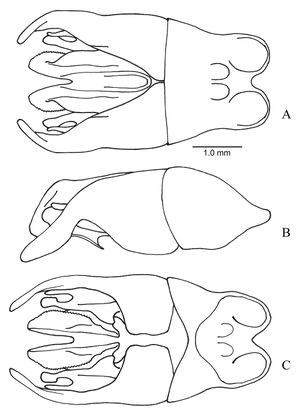