A queenless species with small colonies (average 80 workers) nesting underground. This is the highest average colony size of all Dinoponera studied.

Lenhart et al. (2013) - Workers are recognized by finely micro-sculptured integument which is not shiny, rounded anterior inferior pronotal corner lacking a tooth-like process, ventral side of the head lacking any gular striations and long/flagellate pilosity.

Dinoponera quadriceps may be confused with Dinoponera mutica, but has a finely micro-sculptured integument which is not shiny, lacks gular striations and has a petiole which bulges on the dorso-anterior edge in contrast to D. mutica’s roughly microsculptured integument, striated gula and petiole with even, non-bulging corners.

Patalano et al. (2015) conducted a ground breaking study of genetic differences among castes in Dinoponera quadriceps and the wasp Polistes canadensis. The work sought to understand the genetic control of phenotypic plasticity.

"The two study species (the dinosaur ant Dinoponera quadriceps and the paper wasp Polistes canadensis) exhibit very simple societies, where individuals retain the ability to switch phenotype. This characteristic contrasts with the adult honey bee Apis mellifera and most ants, which exhibit low levels of phenotypic plasticity and have been the focus of most previous molecular analyses. Our two study species share similar levels of plasticity among individuals, with a single reproductive egg-layer (“gamergate” in D. quadriceps and “queen” in P. canadensis) that is morphologically identical to the nonreproductives; if the reproductive dies, it is quickly replaced by one of the nonreproductives. Both species share many ecological traits but evolved social phenotypes independently.

We sequenced the genomes, miRNAs, multiple brain transcriptomes, and methylomes from two eusocial insect species whose life cycles depend on high phenotypic plasticity throughout life. This data includes the first aculeate wasp genome sequence to our knowledge. Both species displayed three key molecular signatures that may be molecular hallmarks for highly plastic phenotypes in simple eusocial insects. These key molecular signatures are as follows: (i) little molecular differentiation between phenotypes in transcription but subtle nonrandom differentiation at the transcriptional network level; (ii) no evidence of a role for DNA methylation or miRNAs in regulating phenotypic differentiation and an overall lack of distinct methylome patterning, together with evidence of methylation turnover; and (iii) a similar role for both conserved toolkit genes and previously unidentified taxonomically restricted genes in phenotypic differentiation. These characteristics may allow plasticity in the regulation of the genome, and thus facilitate plasticity at the phenotypic level (52). The sequencing of more species with different levels of plasticity and multiple phenotypes will be required to confirm this hypothesis (6). However, the available data suggest that these hallmarks contrast with those hallmarks of eusocial insects with low plasticity like the honey bee and most ants, where a large proportion of genes, functionality, and network differentiation are associated with phenotypic differentiation, and where phenotypes appear to be regulated by DNA methylation."

Within its range Dinoponera quadriceps is used locally for medicinal uses. Medeira et al (2015) studied the venom for its effectiveness in mitigating a number of human ills. Their abstract: The South American giant ant, Dinoponera quadriceps (Hymenoptera, Formicidae, Ponerinae), produces proteinaceous venom that has antinociceptive, neuroprotective and antimicrobial effects, thereby supporting the popular use of these ants to treat asthma, rheumatism, earache and back pain. Anticoagulant activity is another biological property that has been shown for the venom of other hymenopteran species, like wasps. The aim of this study was to assess the anti-inflammatory, anticoagulant and antiplatelet properties of D. quadriceps venom (DqV). DqV anti-inflammatory activity was assessed by intravenous administration in Swiss mice in the models of paw edema and peritonitis. In vitro, DqV was assessed in coagulation (activated partial thromboplastin time) and platelet aggregation tests. DqV inhibited (27-33%) the edema elicited by carrageenan and the leucocyte migration (43%) elicited by zymosan. DqV decreased by 57% and 42%, respectively, the content of malondialdehyde and nitrite in the peritoneal fluid. DqV prolonged (1.8x) the clotting time and decreased (27%) the platelet aggregation induced by adenosine diphosphate. The crude venom of D. quadriceps presents an anti-inflammatory effect in mice and in vitro anticoagulant and antiplatelet effects.

Queen caste absent, which is a secondary evolutionary modification characteristic of the genus. All workers are morphologically similar and able to reproduce sexually (Monnin & Peeters 1998). A dominance hierarchy is established among young workers, and only the alpha worker is able to mate with a foreign male (thus becoming the gamergate). Low-ranking workers also participate in the behavioural regulation ('policing') of monogyny (Monnin & Peeters 1999). 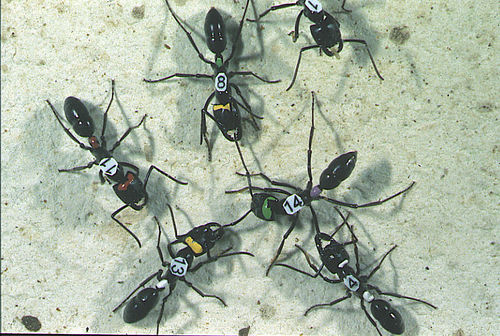 A description of the worker is given in Emery 1911, Mann 1916, Borgmeier 1937, Kempf 1971. Presented below is that of Kempf (1971): “Antennal scape notably longer than head width. Pubescence on front and vertex of head short and inconspicuous. Gular surface of head reticulate-punctate, subopaque, but lacking arcuate striae except for some cases when a few short and vestigial striae appear antero-laterally, just behind the mandibular insertion. Sides of head reticulate-punctate, subopaque. Antero-lateral corner of pronotum obtusely angulate (very seldom subdentate). Pronotal disc reticulate-punctate, subopaque, occasionally slightly wrinkled, bristle pits irregular in outline; paired swellings very faint and obsolete. Hind tarsus I longer than head length. Petiole… of distinctive shape, the anterior surface being slightly inclined forward and often a bit excavate; anterior upper corner narrowly, the posterior corner very broadly rounded; integument minutely reticulate-punctate and subopaque; sulcus on posterior surface always distinct. Terga I and II of gaster reticulate-punctate and opaque; piligerous pits for pubescence discally greatly scattered (in a few southern specimens from Bahia State, these pits are stronger and denser, almost as in gigantea); coarse bristle-bearing pits greatly scattered: pubescence rather scarce on dorsum, denser and more conspicuous on sides. Stridulatory file on tergum II of gaster weakly developed, arising from the anterior border of acrotergite and running streak-like across the anterior half of the same (visible only when acrotergite is fully exposed; observed in five specimens).”

A description of the male is given in Emery (1911), Mann (1916), Borgmeier (1937), and Kempf (1971). Mann (1916) described the male as follows: “Head, including the mandibles, as broad as long, very convex behind. Eyes very large and long occupying the entire sides of head, the inner border deeply emarginate; ocelli very large and convex. Clypeus convex, the anterior border truncate. Mandibles small, pointed at apex, with a small tooth at middle of inner border. Antennae a little shorter than the body; first funicular joint twice as broad as long; joints 2–11 very long, cylindrical, each slightly shorter and more slender than the preceding. Thorax [= mesosoma] robust; scutellum short, triangular, broadly rounded at apex. Epinotum [= propodeum] evenly rounded, without distinct base or declivity, unarmed. Petiole nearly twice as long as broad, narrowed in front, with nearly straight sides; in profile longer than high, flattened above…the anterior slop gradual, more abruptly sloping behind, the antero-ventral surface with a broad, triangular projection. Gaster long and slender, the three times the breadth. Genitalia prominent; the valves board, rounded at apex; cerci long and slender…Wings large extending almost to the tip of gaster … Legs very long and slender…Body and legs shining. Antennae opaque, coarsely, densely punctured; sparsely pubescent, and having much very long, fine erect hairs, which on the apical joints are shorter and confined to the tips; pubescence of apical joint more dense than the rest. Thorax (=mesosoma ) with long silky pubescence, most abundant on the pleurae, and very fine re erect hairs sparsely distributed node without pubescence, but with abundant erect hairs. Gaster with a thick mat of silky pubescence, shorter and finer than that of the thorax (=mesosoma); lateral and apical portions with fine erect hairs… Color rufous, the antennal scape and the first five funicular joints fucous. Wings lightly infuscated, veins and stigma reddish brown. Pubescence yellowish white, exempt the long antennal hairs which are black.”

To this Borgmeier (1937) added that the petiole was “rounded on top”, “the sting of the pygidium [=pygidial spine] long; subgential plate with apex slightly concave”, and that the wings were 16mm long and “slightly yellowish”. Kempf (1971) noted the dorsum of the gaster lacked standing hairs.