This species has only been collected in Mengla County of Xishuangbanna Prefecture in closed forest at 900 metres above sea level or higher. Discothyrea banna is sympatric with Discothyrea diana and they have even been collected together within a single 20 m by 20 m survey plot. (Xu et al. 2014) 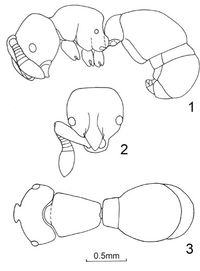 The specific epithet refers to “Banna”, an abbreviation of Xishuangbanna, the prefecture within which the type locality of this species is situated.