These ants form relatively small soil-based nests. While foraging workers are often seen on low vegetation, their nests are cryptic and can be challenging to locate. 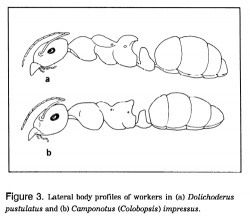 Johnson (1989) - This species is bicolored in the South, a feature enhancing its similarity to D. mariae in that region. Specifically, southern specimens have brownish-orange mandibles, head, antennae, legs, alitrunk, and petiole; antennae and legs becoming darker with age. The gaster is dark brown to black and occasionally with small, laterally-spaced, light colored spots on the first and second segments. In the North, mature specimens are often concolored with dark brown, near black or pale orange bodies. Distinctly bicolored specimens from the North appear to be young specimens.

Structurally, a fine granulation sculptures the head behind the eyes and faint indications of shallow foveolae exist. The surface of the pronotum is impressed with a delicate punctation, though both head and pronotum typically reflect light. Dorsum of the mesonotum with distinct depressions, its surface remaining reflective. Depressions of the propodeum are deeper and associated with stronger granulation, its surface becoming opaque The sculpture described above is weakly developed in southern specimens, a condition again similar to D. mariae. The integument of both petiole and gaster is smooth and shining in strong light, though the petiole is partially granulate in northern specimens Erect hairs are present on the head, alitrunk, and gaster. This body pilosity consists of fewer hairs in southern specimens, another variation in the direction of D. mariae where such hairs are absent. There are no erect hairs on the scapes. In dorsal view, the length of propodeum exceeds its width. The integument within concavity of the declivous face of the propodeum is smooth and shining, though faintly granulate in northern specimens. The scapes, lying in natural repose above the head, surpass the occipital border in northern specimens by a smaller fraction of their length than observed in southern specimens. In lateral view, the petiole of northern specimens is more robust. These differences may only reflect geographic variability; however, differences also exist in nest behavior as discussed below and these ants deserve closer study.