The only species of the genus is found in desert habitats and in areas that are transitional between desert and mountain foothills of the southwestern United States.

A monotypic genus within the Solenopsidini, Dolopomyrmex appears to be closer to two exclusively Old World solenopsidine genera, Anillomyrma and Bondroitia. A comparison of the workers is instructive and striking. All three genera share a closely similar structure of the clypeus, frontal lobes, and antennae, strongly oblique mandibular cutting margins with 4 teeth (3 teeth in one Anillomyrma species), and similar petiolar structures, most notably having the spiracle located anterolaterally on the side of the node, reduced palpal counts, and vestigial or absent compound eyes. The only truly discordant note is the absence of a median clypeal seta in Dolopomyrmex, present in Anillomyrma, Bondroitia, and most other Solenopsidine genera. The presence of a median clypeal seta was once thought to be a diagnostic character for the Solenopsidini (Bolton, 1987), but is presently seen to be more variable and less important than previously thought. Bolton’s (2003) recent redefinition of the tribe reflects this change. (Cover and Deyrup 2007)

Cover and Deyrup (2007) - The type locality is a desert wash with highly compacted, sandy soil located at the border between relatively flat desert and the foothills of the Chiricahua Mountains. It is a very arid, sunbaked habitat for most of the year. Ant species found at the site include: Crematogaster vermiculata (as opuntiae), Novomessor albisetosus, Pogonomyrmex barbatus, Pogonomyrmex imberbiculus, Pheidole desertorum, Pheidole rugulosa, Dorymyrmex insanus, Forelius mccooki, and Camponotus fragilis, all desert or desert foothills ants common throughout much of the American Southwest. The following notes summarize the circumstances of each collection at the type locality. SPC 1441 was collected when a single worker was seen entering a minute, nearly invisible hole with a trace of excavated soil around it, in bare soil between mesquite clumps a day after rain. Chambers containing winged queens, males, some brood, and workers were found between 30-50 cm. deep. SPC 1454 was found in soil “while excavating a nest of another species” and included winged queens as well as workers. SPC 2173, 2174 and 2530 are all small series of workers taken 15-25 cm deep in soil when excavating nests of Pogonomyrmex imberbiculus after rain at the type locality. The Pogonomyrmex nests were all located in bare soil between mesquite clumps. SPC 1441 was maintained alive for about a week in a large plastic petri dish with a plaster bottom and moist cotton in it. The workers fed intermittently on fresh ant brood and termite nymphs, but ignored other dead insects and sweet substances. Mackay & Mackay (2002) report this ant (as Tranopelta sp.) from “Creosotebush scrub and mesquite dominant zones, often near desert playas or arroyos, sometimes in open desert or in forest meadows. Occasionally they are found in salt flats or saltbush communities.” 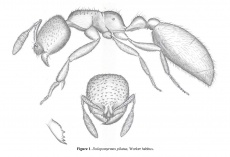 Paratype: TL 9.5, HL 1.27, HW 1.49, CI 117, SL 0.79, SI 53, ML 3.2. With characters in generic diagnosis and as illustrated in Fig. 2. Head broader than long, posterior margin flat, dorsal surface foveolate, foveolae larger and much sparser on posterior half of head. Spaces between foveolae smooth and shining, except on anterior half, where weak striae are present surrounding the antennal sockets and near the mandibular insertions. Clypeus foveolate, except for smooth median strip, erect setae numerous. Antennal scape in repose against head with many erect setae on outer surfaces. Mesosoma largely smooth and shining, sparsely and finely foveolate on most surfaces, coarser foveolae present on mesopleuron. Petiole and postpetiole smooth and shining with scattered fine foveolae, each with a tuft of long, erect setae on ventral surface. Remainder of abdomen smooth and shining with sparse, very fine foveolae and moderately abundant, short erect hairs. Outer surfaces of middle and hind tibiae with abundant, coarse, setigerous foveolae. Color: body generally light to medium yellowish-brown, appendages a lighter brownish yellow. Posterior dorsal surface of head with large, dark brown spot centering on the ocelli. 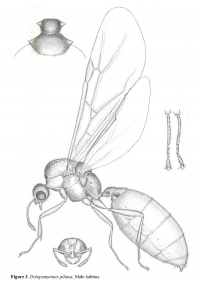 “Pilum” is Latin for the short, but powerful throwing spear of the Roman legionaries. So Dolopomyrmex pilatus is the “spear-bearing ambush ant.”