This species is easily distinguished from other species and is by far the most morphologically peculiar species in the genus. It has exceedingly long scapes, and an incredibly elongated, narrow body. Brown (1953) transferred this species to Euprenolepis based on the constriction of the mesosoma immediately behind the pronotum and the short labial and maxillary palps. As discussed under the genus diagnosis section, however, this placement remains problematic. To my knowledge this species has only been collected three times, and what is really needed are specimens that can be utilized for molecular analysis to confirm placement within Euprenolepis. Euprenolepis echinata has a similarly shaped pronotum and this may indicate a close relationship with E. negrosensis. Also as in E. negrosensis, E. echinata possesses particularly long erect setae, especially on the gaster. (Lapolla 2009)

Known from Borneo (Sabah) and the Philippines.

Biological details regarding the small number of species within this genus are sparse. The best characterized species is Euprenolepis procera, with the following known details. It has polymorphic workers. Colonies are nomadic and on average stay in any single location less than a week. Nests contain from 500 – 5,000 workers and are opportunistically situated in suitable preformed cavities. Emigrations appear driven by the need to find their almost exclusive source of nutrients, mushrooms. Foraging takes place nocturnally. While knowledge of the remaining species is sparse, there is some indication that that polymorphism is not the norm. It is also unclear if procera is the only species, within this genus and within ants as a whole, that feed directly and almost exclusively on mushrooms. 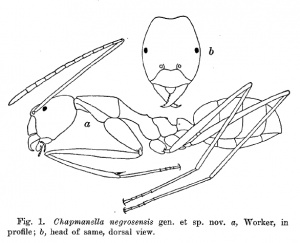 As in worker, with modifications expected for caste and the following differences: Overall color darker than in worker, with head and gastral dorsum brown. Entire body covered in a dense layer of pubescence; erect setae of varying lengths cover head, mesosoma notum, legs and gaster.