Eurhopalothrix bruchi is rarely encountered and is the only species of the genus present in Argentina. Nests are relatively small, with a colony from Argentina containing 48 workers, 6 queens and 4 pupae (Arcusa & Cicchino, 2018). The queens are characterized as wingless, without wing sclerites, and worker-like. The scarcity of pre-imaginal stages suggests that fission of the colony led to the nest’s foundation.

This is a highly distinctive species that has abundant uniform ground pilosity of broadly spatulate appressed setae, but no specialized setae projecting above it. The ground pilosity uniformly covers the clypeus, face, promesonotum, and first gastral tergite. The posterior face of the propodeum has a longitudinal subrectangular lamella instead of an acute propodeal spine. It is one of the smallest known species, with HW < 0.5. (Longino 2013) 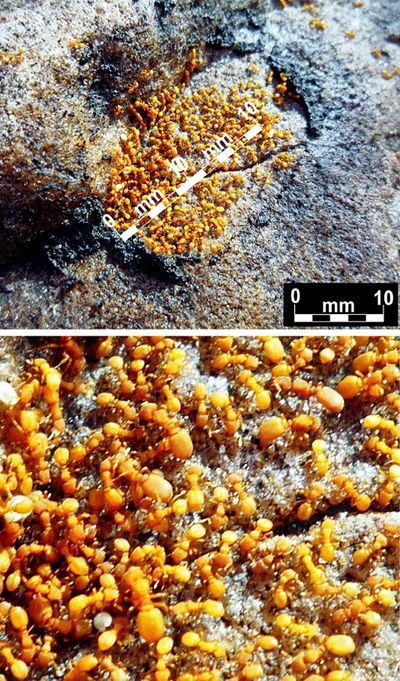 Known from the worker caste and wingless queens.

Form of head, generally similar to that of the dacetine ant Trichoscapa membranifera Emery. Eyes minute. Clypeus broad and flat, with a deep anterior median emargination. Alitrunk very compact; promesonotum almost flat, with moderately prominent but rounded humeri; metanotal groove distinct, and the constriction of the alitrunk at this point also distinct as seen from above. Propodeum short, widened caudad, the dorsum curving evenly into the declivity; declivity concave from side to side and convexly marginate laterally, the blunt margins each with a fine cariniform margin below. There are no traces of propodeal teeth properly speaking, and the propodeal outline as seen from the side is evenly rounded.

Petiolar node much compressed anteroposteriorly, subtruncate but rounded above as seen from the side, transversely elliptical and nearly twice as long as broad seen from above. Postpetiole also transversely elliptical, broader than petiolar node and more than twice as wide as long. Gaster broader than head, with parallel, only weakly convex sides, composed almost entirely of the first segment, which is boxlike and nearly flat above. Apical segments reduced and more or less ventrally displaced, so that they are scarcely visible from direct dorsal view. Legs short and thick.

Body densely and finely granulose-punctulate, opaque, except for the smooth and shining mandibles. Dorsal surfaces of body, legs, scapes and gula covered with numerous short, inverted spoon-shaped hairs, appressed and subappressed, which appear like small, spaced, semitransparent scales. No larger specialized hairs presen t on the head, alitrunk or elsewhere; the thick spatulate hairs of the tibial apices are not markedly distinct from the remainder of the squamiform hairs of the tibiae. Color ferruginous yellow.