Eusphinctus is a species-poor South East Asian genus with apparently small colonies. There are only two species of Eusphinctus, both quite similar, and Brown (1975: 75) allowed the possibility that specimens described as Eusphinctus taylori may be just small workers of Eusphinctus furcatus, but he decided not to synonymize them until more specimens are available. (Borowiec 2016) 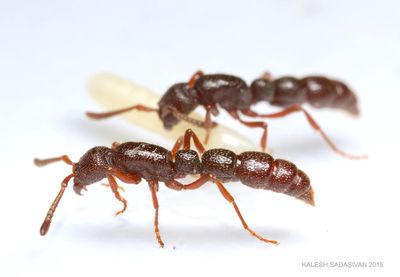 Borowiec (2016) - Worker Eusphinctus workers belong to dorylines with conspicuous gastral constrictions visible between abdominal segments IV, V, and VI. This morphology is also seen in Aenictogiton, certain species of Leptanilloides, Sphinctomyrmex, and Zasphinctus. Eusphinctus is unique in the combination of propodeal spiracle situated low on the sclerite and propodeal lobes present, a large pygidium armed with modified setae, pronotomesopleural suture present, and cinctus of abdominal segment IV simple and not cross-ribbed. This genus is thus far known only from India, Bangladesh, Myanmar, and Thailand and the only lineage with gastral constriction that is currently known to overlap with it is Zasphinctus. In Zasphinctus the pronotomesopleural suture is fused, in Aenictogiton the propodeal spiracle is positioned high and there are no propodeal lobes, Leptanilloides has a reduced and unarmed pygidium, and the neotropical Sphinctomyrmex has 12-segmented antennae and the cinctus on abdominal segment IV smooth. The relative proportions of abdominal segments are also different, with segments IV, V, and VI being about equal in size in Sphinctomyrmex and Zasphinctus, while in Eusphinctus segment IV is the largest of the three.

A. B. Soans and W. L. Brown collected two colonies of Eusphinctus furcatus in Kottiyoor, Kerala, India. One was located in leaf litter near a rotting log and the other one was found under a stone in a shaded creek bottom. There were about 50 workers in each of the observed nests, and one colony contained two ergatoid gynes (Brown 1975).

Borowiec (2016) - Based on morphological and molecular evidence (Borowiec in prep.), I revive Eusphinctus from synonymy with Sphinctomyrmex. The taxonomic history of taxa classified under Sphinctomyrmex is somewhat complicated. Detailed discussions can be found in Wheeler (1918) and Brown (1975), and I only briefly recount the history of taxonomic changes to provide a background for an arrangement proposed here. The genus Sphinctomyrmex was established by Mayr (1866b) based on a single dealate gyne specimen from Brazil. Mayr emphasized the prominent constrictions between abdominal segments present in the specimen in the description, which gave inspiration for the name. Later, Emery (1893a) described a new genus from Myanmar, Eusphinctus, for an ant with similar constrictions. Other species from the Old World followed, described under either name. Wheeler in 1918 decided (after André 1905) to reserve Sphinctomyrmex for all New World forms and further split Eusphinctus into three subgenera, Eusphinctus s. str., Nothosphinctus, and Zasphinctus, according to various combinations of the gyne morphology, number of antennal segments (11 or 12), and presence or absence of eyes in the worker. Brown (1975) discussed the taxonomic history of the genus and all of Wheeler’s characters in detail. He pointed out that the characters used to differentiate these vary and the combinations enumerated by Wheeler do not hold as generic diagnoses with newly discovered species. Brown thus concluded that it was most sensible to synonymize all the genus-level names under Sphinctomyrmex until more evidence, particularly from male morphology, was gathered. However, he allowed for a possibility that two species, Eusphinctus furcatus and Eusphinctus taylori indeed deserved a separate generic status (Brown 1975).

Here I propose a new classification where all the New World species are retained in Sphinctomyrmex, while most of the described Old World forms are relegated to Zasphinctus. The two remaining above mentioned Old World species are separated from Zasphinctus as Eusphinctus. Molecular data shows that all three genera arose independently on the dorylomorph tree. Despite sharing characteristic gastral constrictions, these lineages are also discrete in worker and male morphology (see diagnosis above). Both morphology and molecules support the notion that abdominal constrictions have been independently derived several times in the Dorylinae: in Eusphinctus, Sphinctomyrmex, and Zasphinctus and also in Aenictogiton and some Leptanilloides.

Eusphinctus belongs to a clade that also includes Ooceraea and Syscia (Borowiec, in prep.). The members of this clade share the universal reduction in the number of antennal segments, from 12 to 11 or fewer in the worker caste and from 13 to 12 or fewer in males.