Very little is known about the biology of Formica foreliana.

At first sight the species closely resembles a small Formica rubicunda, especially in the shape of the thorax and petiole and in pilosity, but it differs in having the anterior border of the clypeus projecting and entire, and in the much longer maxillary palpi, much more slender antennae, and the coloration of the head and thorax. (Wheeler 1913)

Abundant (24 - 43 on first tergum, exclusive of row along posterior edge of tergum) long, flexuous, erect hairs on the gaster. It is bicolored, with the head and mesosoma mostly red, the gaster is black. (Mackay and Mackay 2002)

This species is a host for the ant Polyergus topoffi (a slave maker). 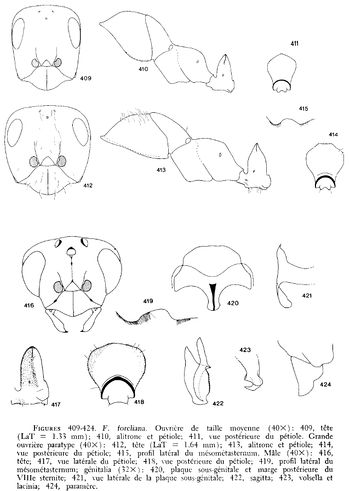 Mandibles 8-toothed. Head, excluding the mandibles, a little longer than broad, a little narrower in front than behind, with straight posterior and feebly convex lateral borders. Clypeus strongly carinate throughout its length, with broadly rounded, projecting anterior border. Frontal carinae very slightly diverging behind, nearly parallel. Antennae long and slender, joints 2-4 of the funiculus longer and more slender than joints 8-10. Maxillary palpi very long, decidedly longer than in any of the preceding species of the rufa group. Thorax rather long, the pro- and mesonotum not very convex, the mesoepinotal constriction rather shallow, the epinotum with sub equal base and declivity, both straight in profile and meeting at a pronounced angle. Petiole rather narrow, cuneate in profile, with feebly convex anterior and more flattened posterior surface, blunt lateral and rather sharp, rounded, superior margin which is either entire or very feebly notched in the middle. Legs moderately long and slender.

Hairs golden yellow, long, slender, erect, sparse; present only on the mandibles, clypeus, front, vertex, pronotum, gaster, fore coxae, and in a single row on the flexor surface of the femora, tibiae, and tarsi. On the gaster the hairs, very conspicuous in certain lights, are present in three or four rows on each of the segments. Pubescence grayish, very fine, dense on the gaster, somewhat sparser on the head, thorax, scapes, and legs.

Described from several specimens taken from two colonies at altitudes of 4,500 and 5,600 ft. in the Huachuca Mountains, Arizona, by Mr. C. R. Biedermann.