The holotype worker was collected in an evergreen forest in Taiwan. This is the only known representative of this montypic genus.

Terayama (2009) - F. lanyuensis is the only species of the genus Formosimyrma, which is a member of the Solenopsidini tribe in the Subfamily Myrmicinae. Within the genera of tribe Solenopsidini, this ant most closely resembles Mayriella, distributed from Nepal through Southeast Asia into Papua New Guinea and Australia to New Zealand. However, it is distinguished from the latter by the median portion of clypeus with a thin and high longitudinal wall (anterior margin of clypeus armed with a pair of sharp teeth just above the mandibles in Mayriella), 8-segmented antennae (10-segmented in Mayriella), and oval eyes (eyes elongate and lower section narrows into a point in Mayriella).

Gaster smooth and shining, with many sub decumbent hairs. 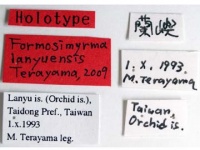 The specific epithet is based on the name of type locality, Lanyu island.