De Souza et al. (2007) - The fungus-growing ants are a New World group of > 200 species, all obligate symbionts with a fungus they use for food. The These ants are found across the American continents and the West Indies.

Leal et al. (2011) - These ants are known as fungus growers because they maintain an obligate mutualism with fungi cultured inside their nests, and which is the only food source for the larvae and an important resource for the adult ants as well (Weber 1972). A wide variety of material can be used as substrate for fungus culturing (Holldobler and Wilson 1990, Rico-Gray and Oliveira 2007), and this variation can be used to categorize the genera into two groups based on their agricultural habits. The so-called lower genera include species that collect mainly fowers, fruits, insect corpses, and feces fallen in the vicinity of their nests (Leal and Oliveira 2000, Mehdiabadi and Schultz 2010). The higher genera include nonleaf-cutting species (genera Trachymyrmex and Sericomyrmex) that collect mostly fallen leaflets, fruit, and flowers, as well as the typical leafcutters that collect fresh leaves from shrubs and trees (genera Atta and Acromyrmex) (see Schultz and Brady 2008, Mehdiabadi and Schultz 2010). 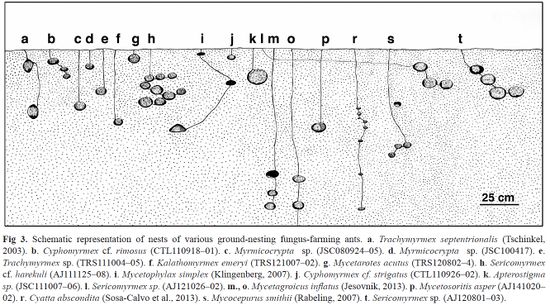 Leaf-cutting ants are very well known due to their remarkable effects on vegetation as herbivores. For example, they can 1) remove up to 15% of the standing leaf crop (Wirth et al. 2003, Urbas et al. 2007) and up to 50% of the plant species in their foraging territory each year (Vasconcelos and Fowler 1990); 2) reduce the vegetation cover by up to 18% and increase light availability within foraging areas (Wirth et al. 2003); and 3) secondarily disperse seeds of forest and savanna plants (Leal and Oliveira 1998, Silva et al. 2007, Christianini and Oliveira 2009). Moreover, leaf-cutters are considered important ecosystem engineers because their huge nests can significantly alter soil attributes (Sternberg et al. 2007) and light regimes (Farji-Brener and Illes 2000), which in turn may influence forest structure, composition, and dynamics (Correa et al. 2010), even after 15 yr of colony death or nest abandonment (Bieber et al. 2010).

Although nonleaf-cutters comprise a diverse and abundant group of fungus-growing ants, only more recently the general biology of these less conspicuous species have been investigated in greater detail (Fernandez-Marín et al. 2004, Pitts-Singer and Espelie 2007, Adams and Longino 2007, Diehl-Fleig and Diehl 2007, Klingenberg and Brandao 2009, Solomon et al. 2011). Lack of field data are probably due to their small colonies and the small size and discrete habit of foragers, which make them less noticeable in nature (Weber 1972, Holldobler and Wilson 2011). Perhaps most importantly, because nonleaf-cutters use mostly fallen plant material and feces as substrate for fungus culturing, their impact on vegetation and economic importance as crop pests is irrelevant compared with leaf-cutting Atta and Acromyrmex (Vander Meer et al. 1990, Wirth et al. 2003, and references therein).

See this chapter of The Ants for a general overview of these intriguing ants.

Bacteria are also an integral part of these co-evolved relationships.

Here are some examples:

Flowering plants are rife with species that exhibit polyploidy, i.e., possess more than two sets of chromosomes. The evolutionary basis and potential fitness advantages of this condition have been explored for many decades. Kooij et al. (2015) discovered analogous duplications of genetic material in attine fungi. They examined fungi samples that were representatives of the different evolutionary stages of fungus farming, i.e., higher attine ants with domesticated gongylidia-bearing fungi and lower- and paleo-attine ants growing fungi without obvious adaptations to being crops.

They found: Domesticated symbionts of higher attine ants are polykaryotic with 7–17 nuclei per cell, whereas nonspecialized crops of lower attines are dikaryotic similar to most free-living basidiomycete fungi. Our opposite ploidy models indicated that the symbionts of Trachymyrmex and Sericomyrmex are likely to be lowly and facultatively polyploid (just over two haplotypes on average), whereas Atta and Acromyrmex symbionts are highly and obligatorily polyploid (ca. 5–7 haplotypes on average). Genetic variation, as shown by examining variation in microsatellite loci revealed the polykaryotic symbionts of the basal higher attine genera Trachymyrmex and Sericomyrmex was only slightly enhanced, but the evolutionarily derived crop fungi of Atta and Acromyrmex leaf-cutting ants had much higher genetic variation. This stepwise transition appears analogous to ploidy variation in plants and fungi domesticated by humans and in fungi domesticated by termites and plants, where gene or genome duplications were typically associated with selection for higher productivity but allopolyploid chimerism was incompatible with sexual reproduction.

Mueller et al. (2017) explored the biodiversity and biogeography of fungal cultivars within the genera Atta and Acromyrmex:

De Souza et al. (2007) - Social parasitism, the exploitation of the nest of another species without contributing to colony maintenance, for example the cultivation of a fungus garden, has been reported occasionally in the attine ants. Megalomyrmex species can coexist as social parasites in attine colonies, consuming the fungus garden (Brandão, 1990; Adams et al., 2000). Gnamptogenys hartmani is also a specialized agro-predator of Trachymyrmex and Sericomyrmex fungus-growing ants in Panama (Dijkstra & Boomsma, 2003). Five taxa are known to be social parasites of other Acromyrmex species, living in and feeding on their fungus gardens, but not contributing to its maintenance: Pseudoatta argentina and Pseudoatta argentina platensis (parasites of Acromyrmex lundii, Acromyrmex heyeri and possibly Acromyrmex balzani), and Pseudoatta sp. (a parasite of Acromyrmex rugosus) produce no worker caste (Santschi, 1926; Bruch, 1928; Gallardo, 1929; Delabie et al., 1993). Rabeling and Bacci (2010) have discovered a workerless inquiline species Mycocepurus castrator that parasitizes Mycocepurus goeldii. In contrast, the recently discovered Acromyrmex insinuator (a parasite of Acromyrmex echinatior) does produce workers (Schultz et al., 1998). Sumner et al. (2004) found that Pseudoatta sp. was not closely related to its host, but A. insinuator was closely related to its host, A. echinatior. Acromyrmex ameliae, a social parasite of Acromyrmex subterraneus in Minas Gerais, Brasil. Like A. insinuator, it produces workers and appears to be closely related to its hosts.

Sosa-Cavlo et al. (2015) presented an excellent synthesis of their collective experience, including numerous methods others have developed and they have refined, finding and collecting whole nests of fungus growing ants for their eventual culturing of whole colonies in the lab. If you are interested in studying fungus growing ants and want to find colonies in the field or are interested in maintaining laboratory colonies but need to know what you need to set up and maintain them, this paper is an excellent source of information.